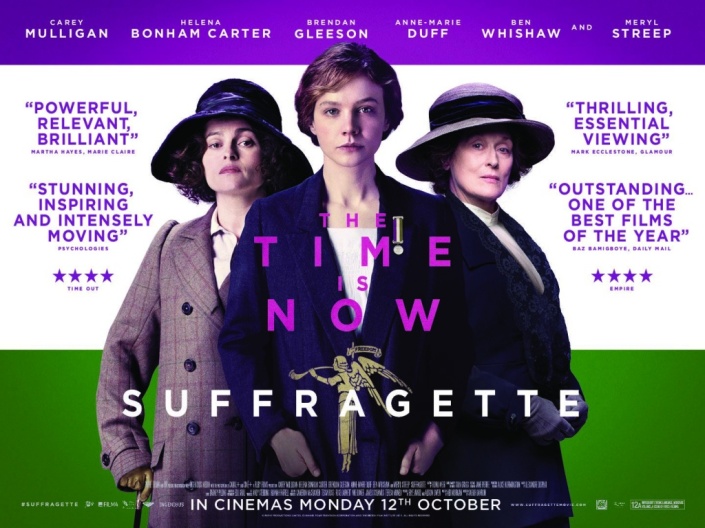 The Review: I don’t think I’ve known what it is to be truly repressed. Sure, I was subject to the odd spell of bullying at school, for everything from my name to my nose, but I’m a white, middle class male who worked his way up from the working classes and, thanks to a diligent mother who put her families’ needs before her own, never really went without during that working class upbringing. So when it comes to a film like this, dealing with the subjugation of a part of society, I tend to judge the success of the film at least in part in how successfully it conveys what it’s like to be part of that minority. Here, then, is the first thing that strikes you about Suffragette: it’s dealing with the rights and issues of a suppressed majority. Here’s a quote from the 1911 census:

Sex Proportions. —Of the 36,070,492 persons enumerated in England and Wales in 1911, 17,445,608 were males and 18,624,884 were females. These numbers give an excess of 1,179,276 females over males, which would, however, be somewhat reduced if we could include in the reckoning the English and Welsh members of the Army, Navy and Merchant Service and mercantile community temporarily absent abroad and also the numbers of fishermen absent at sea on the night of the census.

When you’ve finished having a giggle over the phrase “sex proportions”, take a moment for that to sink in. The women fighting for equal rights were actually the larger proportion of society, yet it took a vocal minority for their cause to even become recognised and, as Sarah Gavron’s film lays out, it wasn’t even something that the majority of women saw as an issue at the time, so conditioned were they into accepting the status quo as being the right way of things.

Gavron and her screenwriter Abi Morgan (‘Shame’, ‘The Iron Lady’) create a fictional character to explore both sides of women in society in the shape of Maud Watts (Carey Mulligan), a dutiful mother and housewife to husband Sonny (Ben Whishaw). They both work at an industrial laundry where Maud’s mother also worked before her, and where the first rumblings of discontent over gender inequality are already rearing their head. It’s when some of the workers take part in more physical acts of disruption such as throwing bricks through windows, all under the auspices of the Women’s Social And Political Union that Maud finds herself questioning the relative lack of rights and status for women and becomes drawn into the WPSU’s work. She and her co-worker Violet Miller (Ann-Marie Duff) attend a parliamentary hearing on the subject, but Maud finds herself speaking at the hearing and is instantly flagged under the police surveillance programme looking to weed out disruptive influences (led by Brendan Gleeson’s inspector) and she’s soon suffering the same indignities and abuse as the other leading members (including Helena Bonham Carter’s pharmacist and Meryl Streep in a cameo as Emmeline Pankhurst).

Morgan’s script is fairly straight and conventional, and what it does well is to get into the intimate details of the indignities, punishments and abuse that these women suffered, simply to be allowed to express themselves in the same manner as their male counterparts. As well as the lack of voting rights, the film also clearly spells out the abhorrent working conditions that many women faced at the time, treated little better than slave labour and with their husbands often watching on; an overbearing, sexually aggressive boss at the laundry might feel a bit much but it works well as a plot device to add tension to key moments and never feels forced. Where Suffragette is slightly less successful is in attempting to understand why the men of society were so keen on preserving the current order; while it does show the lengths the police and government were willing to go to, method isn’t fully underpinned by motive and the film may have resonated even more had it been able to get under the skin. Other than that, the plotting is very much join the dots and barrels along relentlessly towards its historical climax at Epsom racecourse in 1913. The film has a trump card in its location filming at the Houses Of Parliament, but Gavron seems too intent on drawing your attention to the set dressing and some of these scenes have a somewhat staged feel. This is in sharp contrast to the prison and domestic sequences, which capture the squalor and suffering very efficiently.

Where the film comes alive, truly building on the effectiveness of its setting, is through its key performances. Many of the male characters are slightly underwritten or stereotypical so Brendan Gleeson’s stoic policeman provides welcome balance, with a veil of empathy shrouding his requirement to fulfill his duty. But the film really belongs to Carey Mulligan: it’s Maud’s journey that illuminates both the suffering of those joining the fight and the apathy and disdain of the rest of society not willing to rock the boat when they didn’t see the end outcome as important. Mulligan succeeds in being both defiant and vulnerable as the situation demands without ever descending into melodrama and she’s complemented well by the likes of Duff and Bonham Carter. It’s these performances that give the film an emotional core and allow its anger to build before a thought-provoking climax. While I don’t know that I could truly put myself in the shoes of the suffragettes to understand how they felt and what they suffered after having seen this, what Sarah Gavron’s film did succeed in is making me ashamed of the past actions of my own gender, and for that and for the performances of Mulligan, Bonham Carter and Gleeson it deserves your vote when you’re deciding on your next cinema visit.

Why see it at the cinema: Enveloping yourself in the darkness of the cinema will allow you to immerse yourself in the hardship these women endured, as well as allowing you to see every straining emotion in Carey Mulligan’s face and to truly feel her pain.

What about the rating? Rated 12A for infrequent strong language, moderate violence, a scene of force feeding. Way to go again with the rather specific spoilers, BBFC. It wouldn’t be so bad if you didn’t insist on putting them unavoidably

My cinema experience: Having spend the day with my niece for her birthday at Chessington World Of Adventures, I scoured the map for Cineworlds along my route home. In the end, I settled on Cineworld Rochester, a brief diversion off the M25 and where I had time to log a double bill with Crimson Peak.

It’s a fairly standard Cineworld, although they do insist on checking your Unlimited card before every screening. I always find this somewhat disappointing before the second film of a double bill, although I’ve done as many as five films in a day (at Cineworld Stevenage) and been checked every time.

Having then juggled phone (with QR ticket code) and wallet, I then ended up with even less hands as the timings hadn’t worked out for allowing time to have dinner: hence my Cineworld dinner – as in I’ve done this before, probably too often – of a large hot dog, a bag of Revels and a large soft drink. I’ve developed an odd predilection for putting tomato ketchup down the whole hot dog and mustard on the first half only.

I then took my seat on the front row of the main block, which in common with other Cineworlds I visit (Huntingdon springs to mind) has a railing at the front, allowing the long of limb such as myself to dangle their legs and sit in comfort. My only issue was when putting my feet on the railing, it wasn’t actually that far from the seat so I ended up curled up in a sort of ball with my bottom sliding off the seat and my knees under my chin. Good job I can get comfy anywhere. As it’s a fairly new Cineworld (or feels it, at any rate), the seats are still in good nick and there were no issues with sound or vision.

One thought on “Review: Suffragette”