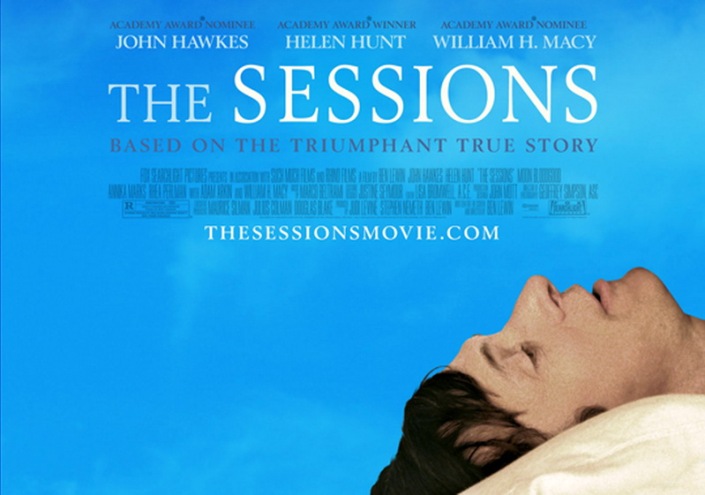 The Pitch: Apparently lying around all day on your back actually makes it harder to get sex. Who knew?

The Review: 2012 was supposed to have been a pivotal year for attitudes towards the disabled, but six months after the Paralympics regrettably very little seems to have changed. 2012 was also notable for high profile films which seemed more at ease with portraying relationships, including sexual relationships, and from Silver Linings Playbook to Rust And Bone cinema at least seems to be more comfortable with the notion that people all experience the same urges, no matter what their physical or mental challenges. In the spirit of openness and honesty, writer and director Ben Lewin takes that a stage further with this frank and disarming tale, based in fact, of the struggles of one man to seek out sex by whatever means necessary. Attempting to do that more sympathetically, polio sufferer Mark O’Brien (John Hawkes) seeks counsel and spiritual consent from his priest (William H. Macy) before engaging a sex counsellor (Helen Hunt) to explore the possibilities still available within the restrictions of his illness.

It’s clear from the outset that this is both a character and a film with a singular purpose, although it’s a multi-faceted one in each case. In terms of the character, Mark’s adjusted to his circumstances about as well as you could expect, but this one final frontier is one he can only approach with a little extra help. The discussions with Macy’s priest serve as an exploration of Mark’s conscience, very much a throwback to old-fashioned values but it’s not giving much away to suggest that this isn’t a deep and meaningful exploration of the ethics of intercourse outside wedlock. Deep and exploration might be a better description for the main thrust (sorry) of the narrative, as Mark and therapist Cheryl embark on six of the titular sessions, as Mark attempts to confront both his physical and mental limitations to see if he can overcome both them and the difficulty of trying to think appropriate thoughts while a woman sits across the room with no clothes on and describes sex in terms not normally found outside biology textbooks.

So any worthiness from tackling the taboo subjects of disability and sex quickly dissipates, and we’re left with a character study wherein Mark’s disability or discomfort could work as a metaphor for any other affliction, whether more severely physical or equally cripplingly emotional. Lewin is keen to explore his characters, but the only logical path to take is more of the therapist take on the same ground When Harry Met Sally covers; where that looked at whether friends would be able to keep that separation if sex intruded, here it’s the separation between sex and love, and Mark’s attempts to understand in his own mind how fine the line between the two is. The Sessions relies more on the honesty of Mark’s exploration of those feelings than anything else, but proves to be just about enough to sustain it.

Lewin’s direction isn’t flashy and The Sessions is very much an actor’s film at its core. It’s the four central performances (Hawkes, Macy, Hunt and Adam Arkin as Hunt’s husband) that do the heavy lifting of the acting, and most attention has fallen on Hawkes for his depiction of polio sufferer Mark and for Hunt for her disarming performance, for which she does spend more time with her clothes on than off. It’s Hawkes who’s the revelation, managing to be humorous and sympathetic but never coming across as damaged or disadvantaged, even given his circumstances. The therapist role feels practically written for Helen Hunt, and her expertise at bringing characters to life with a minimum of background detail helps her to quickly shade in what are actually very lightly characterised relationships with her on-screen family. But the most enjoyable element is probably the banter between Hawkes and his priest and confidant Macy, their open church confessionals getting most directly to the heart of the matter. Given the subject matter, The Sessions comes off feeling a little lightweight, but is nonetheless a pleasant enough exploration of a couple of fields often less trodden.

Why see it at the cinema: It’s not hugely cinematic visually or aurally, but there’s a smattering of laughs to be had and the sensitivity of the script lends itself to the intimacy of a dark room.

What about the rating? Rated 15 for strong sex and sex references. Imagine reading a photographic copy of the Kama Sutra with captions written by a biologist, and that’ll give you a fair idea of the sex scenes. The swearing would happily pass for a 12A, but overall the BBFC have this one right.

My cinema experience: Saw this on a Friday night late showing at the Cineworld in Cambridge. I bought my ticket at the refreshments, as that was the only think open that time of night, but consequently there was no queue. (And briefly, no staff, as the one person serving inexplicably disappeared for two minutes before serving me. He did apologise, so no grudge held.) The showing itself had no projection or sound issues, although the fact that there were only around ten of us in attendance, and apart from one couple at the back we all appeared to be middle aged men, left me feeling I should have been wearing my brown mac every time Helen Hunt took her clothes off.

The Corridor Of Uncertainty: Around 25 minutes of adverts, trailers and announcements; when the screening doesn’t start until 23:20, every second counts and frustratingly that’s one of the longest sets I’ve seen at that particular cinema in a couple of months.