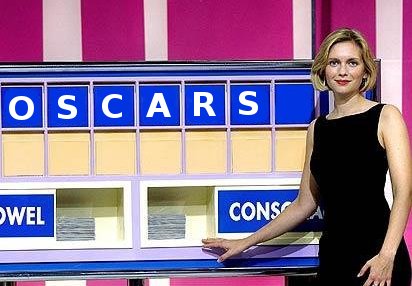 Just two weeks to go until the annual climax to the Awards season, and we’re up to the BAFTAs this weekend. It’s easy to think of the Oscars as quite literally a marathon; thousands of runners, many of which are there to look stupid or make up the numbers, which are narrowed down as they can’t keep the pace, until there’s either a front-runner out on their own, slogging through the awards season like Paula Radcliffe, or there’s a couple which are competing in a nail biting finish right up to the line. At this point this year we have what has pretty much become a two horse race – it would seem that it’s either going to be The King’s Speech or The Social Network, unless something sneaks in and springs a Crash level of surprise at the last minute, like a charity runner in a comedy outfit beating out the professional athletes. There is one thing that stands out about both of these films, and indeed all but one of the Best Picture nominations this year – they’re all really, really short.

Well, not short in terms of the average film you see these days, but they are a lot shorter than the average Oscar winner of years gone by. Allow me to prove this with the use of a well placed graph. 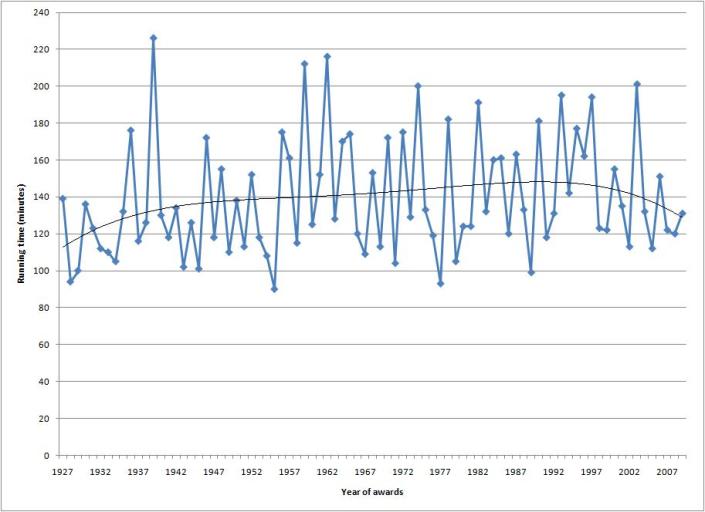 The blue line indicates how long each Best Picture winner has been since the awards began in 1927. There’s a few where the lengths have varied over the years due to Director’s Cuts, studio interference and the like, but to be honest it doesn’t matter how many versions of Gone With The Wind they make, there’ll never be one short enough to remove the need to wear surgical stockings to avoid getting a DVT while watching it. The black line is the underlying trend, which as you can see got longer in the Fifties and then longer again through the Seventies and Eighties, but has been getting shorter since.

They key point in there has been the two hour mark (120 minutes if your mental arithmetic isn’t as sharp as you’d like). Only three winners of the biggest of the little gold men in the last two decades have been under that mark; they were The Silence Of The Lambs, Chicago and Crash, and on that basis not a suggestion that shorter films are a trend we should welcome. The midpoint average in those two decades is actually over two hours and ten minutes. But this year, we only have one film out of the ten which is over two hours: 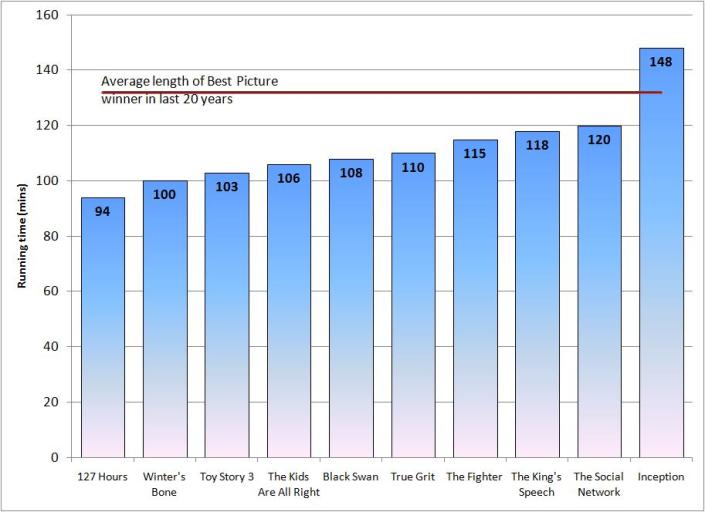 To illustrate how short this year’s field are in comparison, looking at the bottom end, there have only ever been two winners shorter than 127 Hours (and they’re Annie Hall and Marty, in case you were wondering). Right, that’s the science bit out of the way, but what does it all mean? (Other than I spend more time coming up with pretty but pointless graphs than I really should, but of course you knew that already.) The key question is, of course, are these films getting shorter, and is it a trend we can expect to continue?

There was a view that Inception this year proved that audiences can cope with more demanding fare and that films don’t need to be dumbed down, but at the end of the year it’s proven to be the exception rather than the rule. What’s missing from many of this films that has characterised winners in the past is the level of sub-plots and secondary characterisation. Often sweeping historical epics will concern themselves with great expanses of the passage of time; although The King’s Speech nominally spans two decades, most of the drama is over two fairly short periods. That’s not to say this year’s films are poorer by any means, but they are somewhat leaner affairs than most winners from the past.

As to what’s driving that, then look no further than the box office. The Hurt Locker, last year’s winner, was the lowest in terms of box office performance for many years; films have largely been shunted into this two month “corridor” around December and January in order to be fresh in voters’ minds, but that means that there’s stern competition for screens, and for the studios to get the return that they perceive award nominations and the shiny statues themselves will bring in terms of extra cash to line their pockets. A film like Inception could play only three or four times a day at the box office due to its length, but the films at the other end of that spectrum above could get five or even six showings a day in, and films like The King’s Speech have been packing out most of their showings. That driver of box office is likely to keep lengths down; while we might get the occasional longer film, three hour epics in awards season will be very much the exception rather than the rule for as long as cinemas are in business.

As to what will win this year? The Social Network is two minutes longer than The King’s Speech, so if historical precedent means anything, it might just give it the edge, but that’s not even enough time to go out and buy extra popcorn, so it probably doesn’t mean very much in terms of choosing a winner from those two. But ultimately, this year’s nominees have proved one thing – it’s not how long it is, it’s what you do with it that counts.