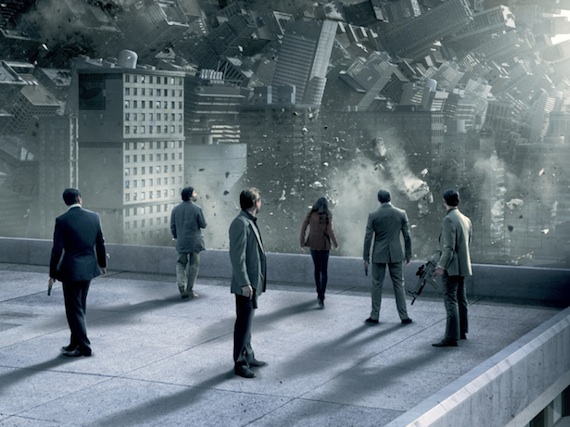 WARNING: while my other articles and reviews mentioning Inception have remained spoiler free, this article contains massive spoilers, the size of buildings folding back on themselves. You have been warned.

It’s been two weeks now since we were all incepted. It appears the idea didn’t take for a few people, but by and large there’s a lot of love for this movie, especially evidenced by the fact that it’s currently third on the IMDb Top 250 Movies. No matter what you think of that chart or its methods, it shows that of the first 100,000 people to see and rate the movie, pretty much 2/3 of them thought it was a 10/10 movie on however they judge their scales.

Maybe because of this, or maybe because people felt they were being incepted with the idea that they should love this movie with all the pre-release hype. Part of that hype was generated because of the poor quality, apart from the odd gem such as Toy Story 3, of the competition in the summer movie market (and if anything, next summer is even worse).

What that has resulted in is not so much a backlash, more a case of people arguing their case where they didn’t fall into that top two thirds. For some reason, most of the critics in New York really didn’t get on with this; there are others who feel strongly enough about their meh-ness such as the Ultra Culture blog. What really amazed me about that was seeing the reaction on Twitter afterwards, as though people still hadn’t made their minds up and were still able to be swung one way or the other, even some time after having seen it.

So I felt similarly compelled to make the case in favour of the movie. As I’ve already said in my IMAX review, I think it’s too early to call masterpiece on this, and I’m not sure I ever will. But there does feel more negative than positive press out there, and somehow that seems to fit well with the idea of inception. As soon as you read a review for a movie, whether from a Roger Ebert or Jonathan Ross type or from a humble part-time blogger like myself, then you can’t help but have your judgement slightly coloured of what you’re about to watch.

Here, though, I’d like to put my case forward for why this movie should be watched, debated and analysed, and why you shouldn’t be afraid to love it if you want to.

From the shootout in Saito’s dream at the start to the all out scrambles up and down the snowy hillsides, much of the action has a pleasingly old-fashioned feel to it. These days, action movies seem to be shot in one of two ways, either the blurry speed of a Paul Greengrass or the whip-flash-cut-repeat Michael Bay style. It’s a lovely reminder that you can make action sequences where it is obvious what’s going on, and this is where Christopher Nolan’s James Bond influences come through most clearly.

There have been various narrative plot structures used in the movies, and many different attempts to subvert the traditional linear narrative. If you can find me another example of where there are at least four narratives running simultaneously, three of which are action sequences, then I’ll happily sit and watch it.

3. You get two movies for the price of one

While the action movies are the most obvious references picked up on here, there’s also a reference to the superhero movie, especially to Nolan’s earlier Batman works, but Spider-Man, the X-Men and many others have seen the same principle in recent years. The first movie is the set-up, where you come to understand the premise, and the second movie then takes that concept and is able to run with it, unfettered. If you consider the first half of the movie to be that origin story and the second half to be the equivalent follow up, both edited into a tight double bill of only two and a half hours, you realise what value for money you’re getting.

4. It’s not actually about dreams – it’s about more interesting things

Criticising Inception for not being like actual dreams feels like criticising Escape to Victory for not making the football pitch the right colour. The dream world is merely the canvas on which the movie is drawn, and allows the suspension of reality at certain points; there are two larger themes that the movie is primarily invested in, which seems to have been overlooked on first viewing by many. The first is ideas; Inception is about ideas first and foremost, how they can be taken by subject and the audience, which works both within the movie and with you sat watching it in the cinema. The other concept, wrapped up in the central plot – which is Cobb and Mal’s tragic romance, when you step back and view the movie from a distance – is memories, and how memories shape our lives and affect our decisions. These are both more thought-provoking concepts than the dream dissection, which has been covered more effectively in other movies.

When you’re getting in actors of the calibre of Michael Caine and Pete Postlethwaite for effectively bit parts, you know you’re onto a winner. The cast list looks good now, and in an action movie you can only really afford to give extensive backstory to the central characters, otherwise you run the risk of drowning in detail and not being able to pay off the set-ups. Michael Mann’s heat is a prime example – it spends the majority of its running time on the three central characters, and even those in the actual gang sometimes get one scene if they’re lucky to establish their position. So the likes of Joseph Gordon-Levitt and Tom Hardy do well with thin characters, and I’ll bet money that they’ll be headlining movies for years to come.

6. The ending is a metaphor for the movie itself

No discussion of the movie is complete without comment on the ending. There’s a view that the ending, which is seemingly ambiguous, is in direct contrast to the rest of the rule-setting obsessiveness. Actually, the ending is a perfect metaphor for the movie: a solid construction, with symmetries and interesting curves, is defined to the point of obsessiveness to define reality, and is then set spinning. Whether it stops or not, or whether that matters or not, depends entirely on you.

7. It’s created its own film school – who planted that idea?

The amount of discourse on Inception online almost has the impossible scale of one of the movie’s many crazy architectures. The combination of ideas expressed in the movie has spawned a vast amount of writing, and funnelling off from that, like the many layers of the movie’s dream world, is a greater understanding of film culture. For example, google “Inception cross-cutting” and you’ll find a raft of articles telling you about the process, its roots back to movies such as Birth Of A Nation and their relative importance in movie history. There’s so much going on here, getting a crash course in movie history and techniques is easier by using Inception as a starting point than almost any other recent movie.

8. The music is amazing, in ways that aren’t immediately apparent

If you’ve been reading articles about Inception, then you’ve probably already seen it. If you haven’t, then watch it and wonder at the level of detail that’s gone into the whole construction.

[…] fields, exactly, but I can remember when it was all film reviews made of graphs and silly poems and obsessing about Christopher Nolan and being freaked out by Catherine Zeta Jones’ face. Somewhere along the line I turned from a […]

Leave a Reply to The Half Dozen: 6 Most Interesting Looking Trailers For November 2013 « The Movie Evangelist Cancel reply