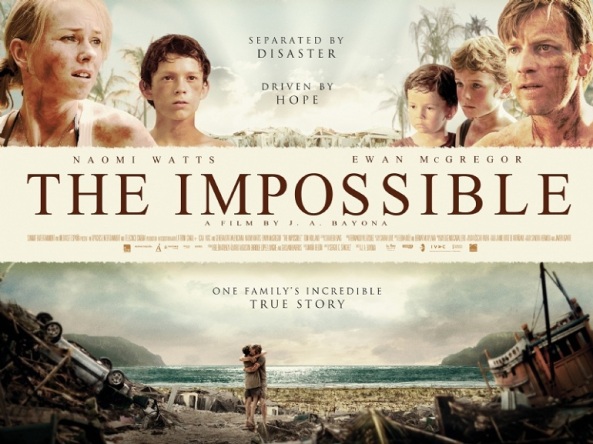 The Pitch: Tsunami, tsunami, came washing over me…

The Review: We live in a fairly fragile world, when it comes down to it. We like to think we live in safety, comfort and security, but actually this lump of molten rock that orbits our sun at 67,000 miles an hour is subject to all kinds of natural phenomena that put our relatively tiny, fleshy bodies at immediate risk. We suffer from the weather above and from the movement of the land below, and one of the most striking effects of this in recorded human history was an earthquake of around 9.0 on the Richter scale which occurred on the 26th December 2004. It struck 100 miles off the west coast of Sumatra, and the sudden displacement of tectonic plates underwater caused a tidal wave that reached heights of up to thirty metres and washed up as far away as Somalia and the Maldives. It took two hours to reach Thailand, but there were no early warning systems, so the wave caused by an energy release equivalent to 1,500 atomic bombs came as a total surprise to everyone, but among the 230,000 people that lost their lives in the disaster there were survivors, and The Impossible is the story of one family’s attempt to count themselves among the latter.

Given the enormity of events (as evidenced by the paragraph above), it’s a brave decision to focus purely on the fate of five individuals, but the real life traumas of one Boxing Day tsunami family have become well known in their native land, Spain. Director Juan Antonio Bayona has Anglicised the story of Maria Belon and her family, with Belon and her husband now portrayed by Naomi Watts and Ewan McGregor. (Bayona has claimed that their nationality is irrelevant, although that would have been more believable had Watts not had to match her accent to the plummy English offspring she and McGregor are raising.) After a brief glimpse of family life in their Thai resort, with floating lanterns and Christmas presents, the wave strikes with devastating force, leaving Watts with eldest son Lucas and with Maria badly hurt, and Lucas attempting not only to help his stricken mother but anyone else they might come into contact with.

The story that unfolds sticks closely to real events, outside the nationality of its central participants, but the five family members are the only real characters. Not only the local Thai populace but the other survivors are reduced simply to interactions rather than defined people, less a facet of the unfolding tragedy and more a storytelling decision to draw focus onto the central family. The tsunami and its effects are devastating, and superbly captured, but the lack of a rounded cast makes the aftermath of the drama feel surprisingly small scale. Part of that is the cinematic language which The Impossible is fighting against; we’re so accustomed to fictional or factual disasters writ large with bulging casts to emphasise the scale of the drama, it takes time to readjust to the intimacy of the family’s story. Ultimately The Impossible isn’t the story of the tsunami on a worldwide scale but on a very personal one; the main flaw in this approach is that by clinging so closely to fact, there’s not enough narrative to sustain three acts of a film.

The other issue with that approach is the storytelling techniques employed in an attempt to contextualise the fate of the family members. The Impossible employs a different narrative device for each of its three main sections (if you count the pre-wave sequence as a prologue); when the wave hits, and the later flashback to it, rely on the staples of the horror genre, all the more startling for working so grippingly and being so difficult for the viewer to endure by the nature of their daylight setting, but not surprising given Bayona’s previous success with out-and-out horror The Orphanage. The films share a common trait in their excellent use of sound, both in design and deployment, and some sequences might take a strong stomach. The middle stretch then threatens a descent into melodrama, but is saved by the quality of the performances, from not only Watts and the ever underrated McGregor but also Tom Holland as eldest Lucas. Sadly, the final act falls back on thriller tropes in an attempt to wring tension from the remaining narrative, and it’s hard not to feel just a little manipulated. The Impossible is a reasonable stab at capturing a worldwide catastrophe still dangerously raw for many, but a wider focus may have served it better.

Why see it at the cinema? The disaster scenes are undeniably impressive visually, but it’s the sound design that’s the most compelling reason to venture out for this one. That, and the collective noise of horror that the audience made on seeing Naomi Watts’ leg injury. Sort of “sssss-ooohuuugggh.” Never quite heard anything like it in a cinema.

What about the rating? Rated 12A for natural disaster scenes, moderate injury detail and brief nudity. That’s a little bit of a surprise to me; I found it a tough watch, and I would be seriously nervous about taking anyone under 12 at all to this one.

My cinema experience: Caught late at work, then in motorway traffic on the way back from work, I arrived fairly late to the Cineworld in Cambridge. Thankfully there weren’t huge queues, but my server didn’t check which showing I was attending and sold me a ticket for the later showing. Thankfully there were still seats at my intended showing so I was allowed to simply slip in. A fairly full house saw me sat on the second row from the front, on the opposite end to a group of people who talked at full volume on and off through the entire film. It was also a bit nippy in Screen 5, judging by the people on the front of the main block sat with their coats on their laps to counteract the cold. Not sure if it was that or what was onscreen, but I did notice a couple of walkouts after about half an hour. Generally the film was enough to keep my mind off those distractions, thankfully.

The Corridor Of Uncertainty: A sharp twenty minutes, short for the Cineworlds normally, left me scrabbling to my seat just as the film started. Wasn’t planning to cut it that fine, but would be the one night I was running late.