The Pirates! In An Adventure WIth Scientists

The Half Dozen: 6 Most Interesting Looking Trailers For March 2012

Well, Mr Oscar has put away his shiny bald head polish for another year, and we’re in the potential quality vacuum that is March. Coming after the vast majority of gongs have been given away and before we get into the avalanche of blockbusters and Hollywood hype that will start with The Avengers in late April, it’s a certain type of film that normally gets released in March. Behold the top 15 opening weekends at the US box office for March, courtesy of statistics trove Box Office Mojo: 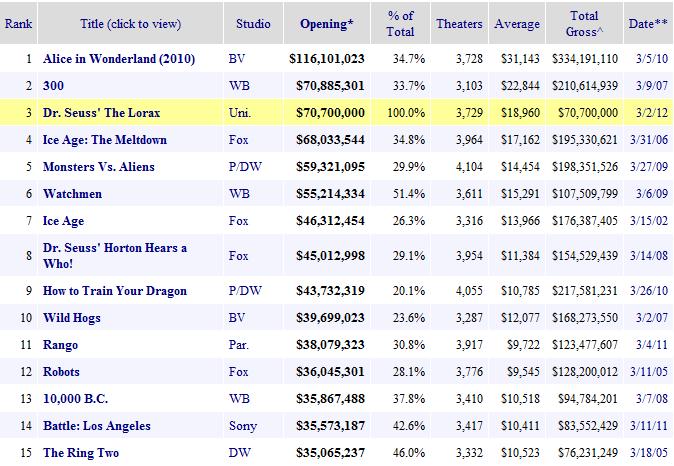 Slightly depressing list, isn’t it? Yes, there are typically two types of film that make an appearance in March: big animations looking to get small bums on seats without the congestion of summer, and large scale films of moderate to low quality also looking to avoid other attention. Once upon a time, it was the month of the sleeper hit: Pretty Woman, Police Academy and Lethal Weapon all started out in March in the US, but now if you’re even a moderately sized film with good potential, you’ll be pitching in for a bigger month and more attention.

And, thanks to the often lengthy wait for animated films to cross the pond, the big new entry on that list, The Lorax, doesn’t reach UK audiences until the summer. So for scale this month we have John Carter (and I’m sorry, just because George Lucas ripped off Edgar Rice Burroughs, doesn’t mean you have to make your adaptation look creepily like Attack Of The Clones, crossed with new Conan The Barbarian) but there is one potential blockbuster and one UK animation lurking in this month’s list that could make March at least vaguely memorable this year.

Based on the look I got when seeing Shame at my local multiplex, where the ticket usher looked at me with such disgust it was as if I’d turned up in a full length brown mackintosh and started drooling and rubbing my thighs, I’m just glad that this look at the life of a paedophile and his young prisoner is playing to the art house crowd only, where they understand these things a little better and don’t judge. I am a huge fan of Michael Haneke, if you can be such a thing without contradiction given the deliberately off-putting nature of some of his works, so this piece in a similar vein from his former casting director was bound to interest me; so nice to see a trailer which isn’t just a montage of clips spoiling the plot as well.

To show how difficult it is for foreign films to get much love, this thriller with the star of The Secret In Their Eyes, Ricardo Darin, is currently playing in approximately three cinemas in London, so the likes of you and I probably won’t see it. Secrets itself was unjustly marginalised to the art houses despite picking up the big foreign Oscar and being just the kind of material that would appeal to big crowds if it didn’t have words along the bottom, and it didn’t generate enough cachet for its star to get any other films into cinemas. Sigh.

On that basis, no prizes for guessing where you’ll be watching one of this year’s nominees for Best Foreign Language Film. If you’re lucky. Repeated sigh.

But remember what March is about? Looking to get product out there in a crowded field? Have an adaptation of a young adult novel that could be the next Potter or Twilight, but don’t fancy your chances in the middle of a summer meltdown? Why then certainly, do release your film in March! Currently tracking at a level which suggests it might even have an outside chance of dethroning Alice In Wonderland from the top of that list earlier, the combination of well-loved material and an exciting cast that includes the likes of Jennifer Lawrence, Stanley Tucci, Donald Sutherland and Elizabeth Banks has even got me planning a trip for this one. (Still never watching Twilight, though.)

The Pirates! In An Adventure With Scientists

I’d also mentioned animation, and frankly who needs American CGI when you can have Aardman, working in good old fashioned Plasticine (or whatever it is that they actually use these days). If you’re not a fan of Wallace and Gromit, then you must have taken leave of your senses, and with a track record in the medium that also includes Chicken Run, this can’t be anything except great. Probably. It’s a shame that the leprosy controversy cost the film a joke and a bit of credibility, though; I thought it was fairly armless. (Disclaimer: The Movie Evangelist knows that leprosy isn’t about limbs falling off and is genuinely sympathetic towards the plight of sufferers, but I just can’t resist a bad pun.)

It’s Werner Herzog, with a documentary on prisoners and the death penalty. After 2011 featured a fascinating documentary about the world’s oldest cave and a memorable guest appearance in The Simpsons, it looks like 2012 is warming up to be another intriguing year for Werner Herzog. He’s the kind of person that deserves to only have interesting things written about him; I feel that this paragraph hasn’t done him justice. Sorry, Werner Herzog. (I do like saying Werner Herzog, though. Werner Herzog.)

This entry was posted in Evangelism and tagged Carancho, film, In Darkness, Into The Abyss, Michael, movies, The Hunger Games, The Pirates! In An Adventure WIth Scientists, trailers.