My 2015 Bar Graph Of Excitement

December heralds the start of two things: an avalanche of Best Of lists and awards nominations (expect my usual review of the year to appear at the end of December in all its usual multi-faceted glory), and seemingly the first round of promotional material for the onslaught on our senses that cinema of 2015 is shaping up to be. Enjoy the first few months of the year, and the relative originality of offerings like Inherent Vice and Big Hero 6, for once awards season has passed, originality is taking a ten month holiday and you won’t be able to move in your local multiplex foyer for all of the oversized standees boldly proclaiming the umpteenth instalment in that franchise you’d tried to forget about.

From March 20th, when the Divergent sequel converges on us, we’ve got the Fastest, most Furious and possibly most poignant car movie ever made, the maddest Max ever seen in the form of Tom Hardy, another theme park ride-inspired trip to Tomorrowland, the most Insidious horror sequel yet, a Minion-flavoured spin-off, more foul-mouthed bear action with Ted, the end of Marvel’s Phase II with Ant-Man, the origins of Peter Pan, Magic Mike getting XXL, the return of the men from U.N.C.L.E, London going the way of Olympus and falling, the Hungriest Games of all, the most not-actually-impossible Mission and a Peanuts movie. What a nightmare, Charlie Brown! And that’s not even counting a host of other remakes and re-releases.

But I’m not a totally jaded cynic of a blogger; not quite yet, anyways. There are a few marquee names that might still get me excited in 2015, and they’ve been putting their various stakes in the ground over the past couple of weeks. Here’s how excited they’ve managed to make me, expressed as I so often do in the form of a bar graph.

If anybody wants me, I’ll be running around the house with my hands clasped together in a gun shape, running around and bah-bah-BAH-AH-ing the Bond theme as loudly as possible.

The Review: I was born at just the wrong time. I’ve already written before how it took a while for the cultural impact of Star Wars to take over my life. I had the toys when I was younger, but I had my first lightsaber fight at university after The Phantom Menace came out, and I bought the gorgeous artwork and making of books of Revenge of the Sith, so I knew the story before I even saw the movie. There’s a part of me that would like to think these were as good as the originals, but deep down I know the truth and I was probably overcompensating for a misbegotten childhood (in all the wrong ways). But there’s no denying that Star Wars changed the direction of movies and popular culture permanently and irrevocably when it landed; that said, the legacy today is more ire of what has come in the last 15 years than fond remembrance of what was there before.

The People vs. George Lucas is an attempt to understand that paradigm shift in the cultural impact of George Lucas’ most prominent creation (although there is also some reference to his second most, Indiana Jones). Few movies before or since Star Wars have fundamentally changed the perceptions and ideals of those watching, but in doing so some sense of intellectual property seemed to pass into the audience. So when George started to make improvements to the originals, and then took a new trilogy in the directions he wanted, then that audience wasn’t happy. If anything, they wanted blood, or revenge (at least until they got Revenge), but they’d probably have been happy for it just to stop…

Director Alexandre O. Philippe uses a very loose and slightly neglected courtroom framework to construct his narrative, but this is a largely linear wander through the most famous missteps of George Lucas post-Howard The Duck, using a combination of talking heads and fan-made films submitted via the web. Particular attention is given to the special edition re-releases and the subsequent sequestering of the original versions, and indeed to the most controversial alterations to them (don’t mention Greedo – I mentioned him once, but I think I got away with it), and the sheer level of ill feeling summoned up by the prequels, the fourth Indiana Jones movie and the continuing evolution of George as a hate figure for those who once adored him.

What feels like polemic about a third of the way through and almost a call to arms for oppressed Jedi across the galaxy by half way actually takes a much more balanced view by the end. Of course, no one who wasn’t in love with the originals could have conceived this, and while the view may be balanced, there’s no attempt made to justify Lucas’ actions over the period, or indeed to suggest right or wrong. What it does work as, very effectively, is a primer for those looking to understand how not to keep a legacy going, and indeed to start a debate whether any event will have the same impact again, or whether its creators would even want that legacy and the pressure that comes with it.

I know what you really want to know, though – what’s my view? Because everyone must have one who’s lived through this. Although I don’t love any of the last / first three Star Wars movies as much as the originals, Phantom Menace has the best music track (Duel of the Fates) and the best lightsaber fight of all six and the first twenty minutes of Revenge of the Sith were what I used to illustrate to my wife, who’s never seen Star Wars (sigh) what a Star Wars movie should be like. I was more crushingly disappointed by the fourth Indiana Jones movie than any of the prequels, and Spielberg must be as much to blame for that. In fact, when did he last make a truly great movie? Ten years ago? Fifteen? Has George ever descended into mawkish sentiment and unbelievability with quite as much regularity as Steven? Next case, The People vs Steven Spielberg, if you please.

Why see it at the cinema: Everything and anything about Star Wars should be seen in a cinema, and since this is better than the prequels themselves, and you saw those there, you should be seeing this there. Simple. 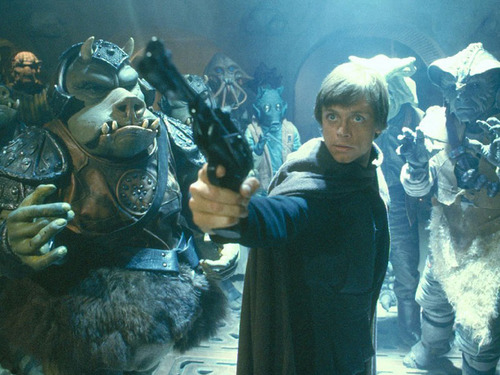 I’d like to think that the last two or three years of heavily dedicated movie watching have given me a fairly rounded view on cinema. I do still like my mix of summer blockbusters in among the more art house delights I’ve discovered as I’ve started to venture into middle age. But I think it’s taken a while for me to refine my critical faculties and to truly appreciate what was good. For evidence of this, look no further than my childhood.

Whenever I read about how people my age got into movies, it often relates to a Star Wars epiphany. Now I’m 36, which means that when Star Wars arrived in the UK, I’d have been no more than four. If I did go and see it at the cinema, then that memory is lost to the ravages of time now. So the first experience I can remember of a Star Wars movie when I was a kid was The Empire Strikes Back in the cinema.