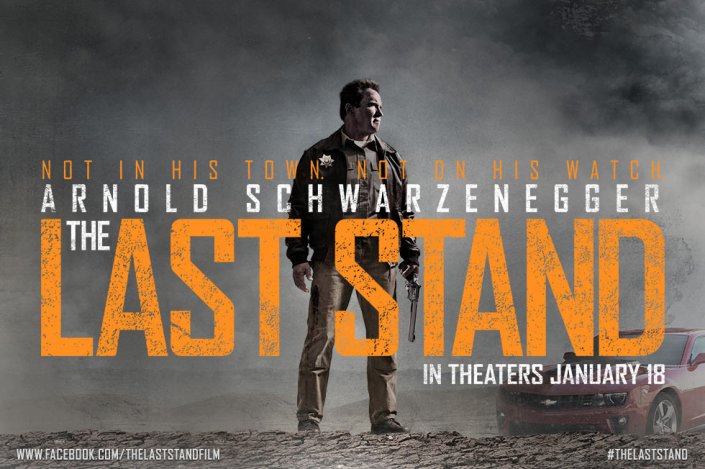 The Pitch: He said he’d be back. It just took a few years…

The Review: When I started this blog nearly three years ago, it was with an intention to share and express my love of cinema in all its forms. I’ve never considered myself to be much of a writer, but have always hoped that enthusiasm and my increasing knowledge would carry me through. You, dear reader, can continue to be the judge of that, but I’ve always enjoyed a broad church of film and that’s only increased over the past five years. But some things have been missing from the cinema catalogue, thanks to my age and a large number of years when my viewing was restricted to home entertainment. One of the most significant gaps in my viewing experience has been the Austrian Oak, the ultimate action icon of the Eighties and Nineties, and if you discount his selection of cameos from the last decade, I can count two Arnie films I’ve seen in the cinema for the first time: The 6th Day and Eraser. If you had the chance to see either yourself, you have my sympathies, but like me you might just be pining for a great Arnold Schwarzenegger film to show up in cinemas.

The Governator has stopped governating, or whatever it was he was attempting to do to California for most of the last decade, and he’s decided to see out his remaining years doing exactly what he does best: make action movies. You’ll find he’s easing himself in gradually, as he’s only in around half of The Last Stand. The set-up does see a bit of Arnie, looking befuddled while Johnny Knoxville and Luis Guzman clown around in their sleepy backwater on the U.S. / Mexican border, while in the main plot Eduardo Noriega’s highly dangerous criminal gets sprung from his prison transport and slips through the fingers of FBI agent Forest Whitaker. Noriega’s making a run for the border, but it also turns out he’s an illegal but highly experienced racing driver in his spare time (but of course) who’s got a 250 mph supercar and is making a break right for Arnie’s border town, where Peter Stormare and his crew are preparing to spring Noriega over the border when he arrives. As Forest and his FBI chum(p)s repeatedly fail in their attempts to slow down a man so powerful he doesn’t even need to stop for gas when driving half way across southern America, only Arnie, that guy from Jackass and the guy who they built a statue of in Community stand in his way.

I’m not going to pretend The Last Stand is high art, and thankfully for most of its running time neither are the makers of the movie. It’s director Kim Jee-Woon’s first big English language pic, and the director of I Saw The Devil and The Good, The Bad And The Weird knows how to make an action movie. He keeps his camera interesting through everything from the initial break-out to the final showdown (including an innovative chase through a cornfield), but even he can’t wring much originality or tension out of the set-up. Forest Whitaker gets the expository role, and I can’t remember a part he had so thankless since Species – although a few others have come close – and the first hour cuts between his efforts and the incompetent sleuthing of the other hometown police, including Jaimie Alexander and Zack Gilford. It’s all scripting by rote, and starts to tip over into deeply maudlin around the hour mark, as if it needs something to kick it into high gear.

That thing is about 6′ 2″ and built like a leathery tree, and when Arnie finally gets his thing on, the whole film goes up at least two gears in both entertainment and action. The earlier sequences almost feel a cunning ploy, to soften the focus of the background elements while setting up the stakes, so that when the elderly Terminator does arrive it feels all the more impressive. Either way, when it happens, Arnie simply comes in and blows everyone away, driving, punching and blasting through everything in sight like an unstoppable Austrian train. It does acknowledge he’s getting on a bit, briefly, but then proceeds to ignore that and the last act is an orgy of satisfying movie violence and occasionally silly comedy, one where all of Arnie’s team get a reasonable look in. It’s a complete throwback to the action movies Arnold made his name with in the Eighties, and while it’s no Predator or Commando it’s an awful lot better than Eraser or The 6th Day, crucially only taking itself too seriously for one brief, Ahnuld-free stretch in the middle. If you want to just kick back and turn off your brain, you could do a lot worse.

Why see it at the cinema: Hopefully you’ll see it with an audience who all enjoyed the over-the-top elements as much as I did. The poor box office seems to be an indication that audiences would rather illegally download this kind of movie than see it in a cinema; their mistake, don’t make it if you’re a fan and get the chance.

What about the rating? Rated 15 for strong bloody violence and language. As you’d expect – or hope for – from the director of I Saw The Devil. Plenty of blood spray, but it’s more cartoon violence than anything.

My cinema experience: Picked up my ticket from the ticket machine, dodging the reasonable queues at the Sunday afternoon Cineworld in Cambridge, and settled in near the front on the left of a half-full cinema. It appears I picked the wrong half, as all of the raucous laughter and enjoyment was coming from those sat further back on the right hand side; everyone else on my side, with the exception of me, was sat in stony silence for the majority of the running time. I was this close to switching sides… No sound or projection issues.

The Corridor Of Uncertainty: Twenty-two minutes of promotional activity of the usual form before the film commenced. Just about reasonable.