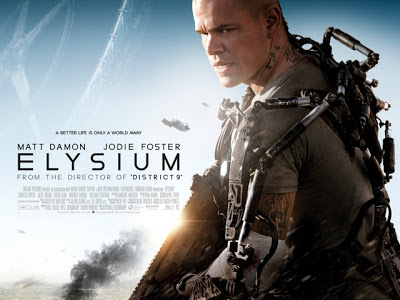 The Pitch: Prigs In Space.

The Review: The world should be grateful for the cinematic legacy of Peter Jackson, from his seemingly never-ending tramping over hills in New Zealand to his early splatterfest horror movies (the scene with the custard in Braindead still makes me wretch just thinking about it), but he can also take credit for helping to bring the work of Neill Blomkamp to a wider audience. Blomkamp is a South African film maker who came to Jackson’s attention when a Halo movie was in the works; when that didn’t pan out, the pair produced District 9, the 2009 film that went on to box office success and a Best Picture Oscar nomination. Blomkamp has now branched out on his own, both writing and directing this follow-up which takes a similar allegorical view of world issues, and couples it with “how-did-they-do-that?” visual effects and an eclectic cast.

After two attempts to get rappers to play the lead role fell through (and imagine how different this would have been with second choice Eminem in the role), Matt Damon has stepped forward and shaved his head to play Max De Costa, career thief making an effort at rehabilitation in the slums of Los Angeles, now entirely occupied by former Mexican immigrants and policed by overzealous robots. When Max gets on the wrong side of them, his parole gets extended but also lands him in hot water at work, a chain of events that leads to Max being exposed to a lethal dose of radiation. With only five days to live, his only hope is to make it to the space station Elysium, where medical beds can cure any ailment, but the borders are closed and secretary of defence Delacourt (Jodie Foster) is willing to take any measures, including getting her earthbound agent Kruger (Sharlto Copley) to shoot down any attempts to gain entry. With Delacourt’s power under threat and Max being asked to help not only himself but his childhood friend Frey (Alice Braga), the stakes are soon escalating and Max may have to resort to desperate measures to achieve his goals.

District 9 managed to successfully blend action and high concepts and explored a number of recurrent themes in South Africa. This time the American setting is no less politically minded, but it’s immigration, healthcare and the general class divide that get the big budget treatment. Blomkamp has stated an intention to avoid being overtly political, but it’s hard not to feel that he’s on the side of the immigrants in this situation, even if that immigration process has driven the wealthier classes all the way to space. We actually get to see very little of life on board Elysium, which also naturally reinforces our sympathies towards those on the ground, and the rich and the elite are generally seen to be operating in a rather selfish moral vacuum. Where Elysium doesn’t quite work is then in gaining your sympathies in the same way as District 9; there Wikus succeeded in being an entirely unsympathetic character that still drew pathos as his plight became fully apparently, but there’s never the same level of engagement with Max and Frey’s predicament.

There are a few other issues as well, which can be summed up by occasionally over-shaky shaky-cam action scenes, a slightly convoluted plot that gets bogged down in the middle, and the accents: Jodie Foster’s magical floating one and Sharlto Copley’s so-thick-you-could-stand-your-knife-up-in-it one. There is still a lot to like about Elysium, as many of the other supporting roles work well (including the always good value William Fichtner, fresh off the back of an even slimier turn in The Lone Ranger), Matt Damon makes a reasonable anchor for proceedings and the action scenes, when at their best, are remarkably effective. The visual effects work is, by and large, stunning, and blends seamlessly with the grubby slums that make up a large part of the setting. It never quite sets the pulse racing in the same way as District 9, so the all-action finale doesn’t quite grip the same way, but it’s still original storytelling executed reasonably well, and for that in a summer clogged up with half-baked revisions of unoriginal ideas and more sequels than you can swing a stick at, should give us cause for a small celebration. Let’s just hope that Blomkamp’s next project, sci-fi comedy Chappie, has slightly more to offer.

Why see it at the cinema: The scale of the action justifies seeing this on a bigger screen, and some of the shaky-cam means you’ll have a better chance of following what’s going on if you give yourself a larger screen area to work with.

What about the rating? Rated 15 for strong language, bloody violence and gory images. I’ll be honest, I watch a lot of horror and there was one shot here that was enough to make me go “eew”. If that’s not clear, that’s a recommendation, albeit a twisted one.

My cinema experience: A reasonably busy showing on a Bank Holiday Monday afternoon at the Cineworld in Cambridge. I arrived just as the film was starting, and the opening’s so dark that it took me a moment or three to find my seat. Once settled, there were no noticeable issues in projection or sound.