How would you cast a new James Bond? Would you be looking to take a mould of Sean Connery, then cast another from it? Is tall, dark and handsome enough to make a Bond, or is there some other ingredient required for the perfect suave, sophisticated spy? Ian Fleming had a very certain idea of what Bond looked like, and Daniel Craig certainly wasn’t it. In the novel of On Her Majesty’s Secret Service, Bond is described as:

“…certainly good-looking … Rather like Hoagy Carmichael in a way. That black hair falling down over the right eyebrow. Much the same bones. But there was something a bit cruel in the mouth, and the eyes were cold.”

That’s not Craig; but nor does it reasonably describe any of the other Bonds, save for possibly Welshman Timothy Dalton. In the novel of Casino Royale, Vesper also describes Bond as reminiscent of Hoagy Carmichael, but also “cold and ruthless.” In that pure description lies the heart of Daniel Craig’s performance, but what Craig also brought to the part was a sense of humanity and maturity. He also might as well have been green with pink spots as it might have caused less controversy over his looks.

But no matter, all of that CraigIsNotBond nonsense is well behind us now, and it goes to show that it’s not what it looks like, it’s what you do with it that counts. Emboldened by finally being able to exercise the rights option it got to the first Fleming novel in a swapsies deal for Spider-Man rights in 1999 (seriously), the studio embarked on a full-on reboot, taking the idea of reinvention at the fore since Dalton’s first and taking it to its logical conclusion. But Casino Royale captures something that no Bond before it has managed, not even the early Connery films, and that’s to capture a relationship between a man and a woman that doesn’t feel like either a series of cheap jokes or the inevitable advances of a man who’s bathed for a month in pure pheromones.

So without further ado, I present my legacies for the twenty-first EON production, based on the first Fleming novel.

1. James Bond finally comes of age, by going back to the start

We finally get the first adaptation in the official series of the James Bond novel that started it all, the last major novel of Fleming’s series not to be made by EON. In order to adapt this, the series is effectively rebooted, and for the first time all of the history is washed away; Bond is a clean slate, to be started with afresh and with no emotional baggage for an indeterminate number of years weighing him down. As long as you ignore the fact that M still looks the same as the last Bond’s did. Moving swiftly on…

But not only does the film take a fresh approach to the stunts, mixing in a greater sense of realism to the scaffolding-scaling antics, and is also not afraid to take big risks with the structure, devoting most of the second act to the poker game, but writer Paul Haggis seems to be the first person to attempt to take the words of long time story writers Neal Purvis and Robert Wade – or indeed, of anyone else – and to make them sound as if they were emerging from the mouths of two grown adults. Often in the past Bond has sounded close to mature, only to be undercut by a mop-headed Bond girl, or just occasionally (*cough* On Her Majesty’s Secret Service *cough*) the other way round, but here the dialogue sparkles, the performances radiate and even two people flirting on a train is an absolute joy to watch. Just in case you’ve forgotten, see how efficiently Craig and Green even manage to skirt over the obligatory product placement.

It’s this sensible approach, favouring this kind of sparring over cheap chat-up lines, which carries through Quantum Of Solace – admittedly in a slightly more po-faced fashion – and one which I steadfastly hope is keeping pace through Skyfall, and many years of Bond to come, until the pendulum inevitably swings and we end up back at the gurning antics of the later Moore era, probably with Rupert Grint as the first ginger Bond.

The other notable achievement of Casino Royale in setting the template for the future is to break it even more wide open. While Live And Let Die had managed to get by without the quartermaster, Casino Royale really does strip it back to the barest bones, with both Q and Moneypenny getting the boot, and staying off for QoS, proving just what it is possible to drop from the percieved “formula” and still make a successful Bond film.

The other bold decisions, at least in the context of the series, range from the stylistic to the dramatic. At the beginning, we see a black and white sequence, and while the series dabbled with slo-mo as far back as the Sixties, it’s the first time that the colour palette has been drained completely. Now anything goes, opening up Skyfall for the likes of Roger Deakins to come in as DoP, and the sky blue is the limit. Or the green with pink spots.

The ending is also a first, in that in every one of the previous films Bond gets the girl, even if she gets shot in the end. See that rule book? It’s just been torn up and tossed in the bin. Take that, authority, there’s a new Bond in town. Craig’s Bond ends both of his first two films alone, unless you count Dame Judi at the end of Quantum as the Bond girl. (No. Just no.)

Next time: If you had a choice of the remaining Fleming titles, would you pick:

a) The Hildebrand Rarity

Previous Bond legacy posts: Dr No / From Russia With Love / Goldfinger / Thunderball / You Only Live Twice / On Her Majesty’s Secret Service / Diamonds Are Forever / Live And Let Die / The Man With The Golden Gun / The Spy Who Loved Me / Moonraker / For Your Eyes Only / Octopussy / A View To A Kill / The Living Daylights / Licence To Kill / Goldeneye / Tomorrow Never Dies / The World Is Not Enough / Die Another Day

Go deeper for the full BlogalongaBond experience, courtesy of The Incredible Suit. 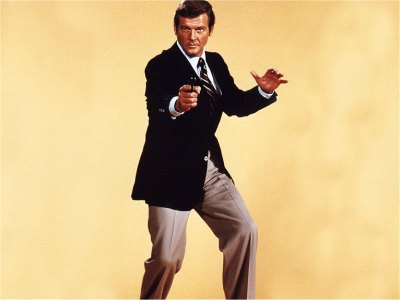 News reached us yesterday that Bond 23 is on its way in approximately, oh, about 667 days or so. Good news everyone! Daniel Craig is due to return as Bond and, as entirely expected because it was announced before MGM ran out of pennies, Sam Mendes will tell him where to put his gun. I will, of course, be near the front of the queue when it’s released, for what will be the seventh Bond I’ve seen on the big screen. Thanks to my age and the tragic fact that, between The Black Cauldron in 1985 and Speed in 1994 I saw only one film in the cinema, my childhood passed entirely untroubled by seeing Commander Bond on the big screen.

Of course, for the last half of that period there was nothing new to actually miss, given the gigantic rights wrangle that engulfed the series and stopped us getting Bond 17 with giant robots made by Disney. (At least, if Wikipedia is to be believed.) Nonetheless, all of my childhood understanding was based around the Bonds that were on heavy rotation on ITV while I was growing up, so my understanding of what it was to be a good Bond was based on one man – Roger Moore.

The suave sophistication, the safari suits, the arched eyebrows and the innuendos that bordered on filth; this is what it was to be a man in the Seventies, or indeed early Eighties when I was watching. I was also slightly crippled by growing up before the advent of the VCR and having such thing as a bedtime; in particular, my first viewing of The Spy Who Loved Me was cut short by this parental annoyance. I did manage to put it off just long enough for a car to be involved in a really long chase and then the car drove off a pier and went underwater and then it was like a submarine and it had a scanner thing and then it fired out a missile and it blew up a helicopter!! BRILLIANT! I do think it was fairly pointless sending me to bed at this point, as I was so fundamentally over-stimulated that I stayed awake for what felt like hours, then dreamed of Lotus Esprits and men with metal teeth.

And so it was that finally, in 1995, my first ever big screen Bond experience arrived, in the form of Goldeneye. After such a long wait, anticipation could have been fatally high, especially after this fantastic teaser trailer had been getting my excitement inflated for months;

As it turns out, the only blemish of any kind was Eric Serra’s score, which is an abomination against man and nature; thankfully John Altman was brought in to rescore a few key sequences, including the tank chase through St. Petersberg. Of course this was what a Bond should be like: gruff, Irish and with a hard stare and a nasal monotone.As I stumbled out into the night after having watched it for the first time, I had a good look around, then hummed the theme loudly to myself as I skipped up the road, pausing occasionally in a doorway to put my hand and fingers into a gun shape and imagine I was about to get the drop on 006. I also did this the second time I saw it at the cinema. And the third. And also possibly the fourth.

Casino Royale heralded yet another new era, and landed when my cinema addiction had finally begun to exert its vice-like grip. Finally, it felt like a grown up Bond film, with interplay and decent dialogue for Bond and his lady and stunts that were well thought out and well executed. We’ll ignore the product placement so gratuitous that I think the backs of my retinas had sponsorship on them, which has blighted all of my cinematic Bond-age, because it’s time to start getting excited again. By the time the nights are drawing in next year, either the little kid or the grown man in me, or maybe even both, are going to be very happy.  Fingers crossed.

This entry was posted in Movie Memories and tagged Casino Royale, childhood regression, Goldeneye, Roger Moore, The Spy Who Loved Me.