UPDATE: It appears I wasn’t the only one asking, and with my momentum adding to the bandwagon, Cambridge Arts Picturehouse happily agreed to move this Friday’s screening to their main screen, Screen 1. A victory for people power and common sense, and a huge thanks to the staff of the Picturehouse, not least marketing manager Jack who I understand moved the seats across this evening in a time-consuming process, and to Keith and his team who will have to call everyone to tell them tomorrow. Thank you all, I owe every one of you that pint next time I see you, which might well be this Friday.

Rejoice, great peoples of Britain, and especially those that live in the vicinity of Cambridge. 2001 returns to cinema screens this Friday, thanks to a science-fiction season from those nice people at the BFI, and for me it’s a particular thrill. As you know, I write a cinema blog based on encouraging people into cinemas, and while I’ve been a big fan of a lot of other Kubrick works, I’ve always struggled to engage with 2001 on the small screen, so I’ve never got much more than half an hour in. This is an opportunity to assess the film in the perfect environment, seeing it on the biggest screen possible; for me, locally, that means screen 1 at the Cambridge Arts Picturehouse.

Except it’s not playing in Screen 1. It’s playing every night, which is great, but most nights it will be in Screen 2 and one night it’s bumped all the way down to Screen 3. How can this be, I hear you cry? Well, on the face of it this is a commercially sensible decision. There are not one but two British films in cinemas right now that are causing audiences to queue round the block, and chances are that either The Imitation Game or Mr Turner would sell out whichever screen they were in, where 2001 could struggle to fill one of the smaller screens.

But hang on again. Here’s the seating plan for Friday night’s 20:30 showing, four days before the event. 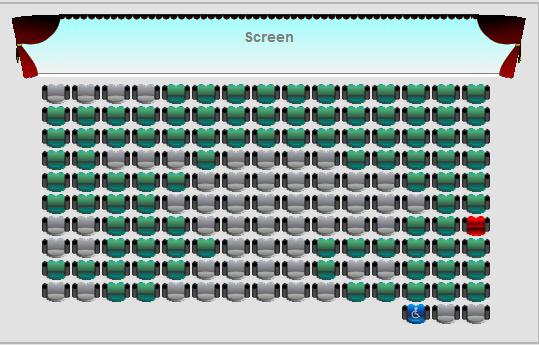 It’s a third full already. And it’s only Monday. Surely if we all booked for the same night, we could easily fill Screen 1? We’d be happy, and the Arts Picturehouse could cheerfully fill the other screens with British blockbusters.

I know a lot of the staff at the Arts Picturehouse, and they’re all lovely people. I’m sure if we can persuade them that we can fill a screen as easily as Benedict Cumberbatch stammering to victory over the Germans or Timothy Spall frothing at the mouth into his latest artwork, then as long as there’s no projection reason why screen 1 can’t take it, they’d consider bumping it up.

What I’ll do is if this causes anyone at the Arts Picturehouse any increase in work, I will buy you a pint at the very least next time I see you. I will even come down and usher people to their seats for free on Friday night. I would do that on the other screens and miss the film if it meant that other people got the chance to see this on the biggest screen in the area.

If not, then I might as well wait until December, when I can sit in my favourite cinema seat in the world up the road at the Abbeygate in Bury with screen size comparable to screen 2, but let’s be honest, you know me, I’ll probably do that as well. So what do you say? Are you with me? Let’s bundle on the Arts Picturehouse on Friday night.