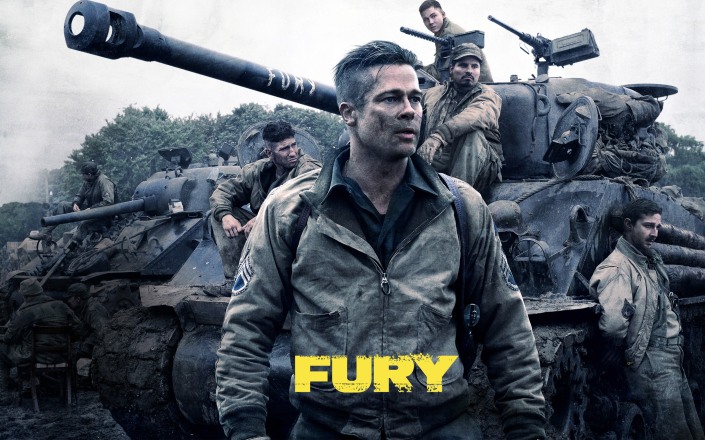 The Review: War movies are an interesting reflection on how we perceive war itself. While there have always been war movies not afraid to explore the horrors of armed conflict. The romanticism and Boys’ Own heroics of the majority of the most famous war movies of the Fifties and Sixties has gradually seen the needle swing the other way; now your average war movie is a more cynical, affected view of the affect of conflict on the individuals that are asked to fight. Saving Private Ryan and its contemporaries have also taken advantage of modern techniques to put you, the viewer, right in the midst of the action and to almost ask the question why anyone would ever want to sign up for this kind of exercise. Fury takes a slightly rarer place in that it’s set in April 1945, towards the end of the largest global war in history, and at its heart is a bittersweet view that, even if you can see the light at the end of the tunnel, you’ve still got to get out of the tunnel.

It’s a surprise that there haven’t been that many successful tank-based war movies in the past, when you consider both how well tanks perform in action sequences – from the likes of Indiana Jones And The Last Crusade to Goldeneye – and also given the fact that they’re the land equivalent of a submarine: a group of surly men locked in a tin case in the heat of battle, with conflict raging on both the outside and the inside. The group locked up in the titular tank here include Brad Pitt’s unwavering sergeant, Shia LeBoeuf’s unconvincing Bible-quoting gunner, Michael Pena’s token ethnic driver and Jon Bernthal’s monosyllabic loader. Into this rather generic, stereotypical mix is thrown Logan Lerman as the painfully young typist who’s assigned to the tank because everyone else has already been killed, and Fury represents two hours of increasingly disastrous on-the-job training.

Where Fury does excel is in making full use of its tank in the war setting. Director David Ayer stages a number of set pieces throughout the hefty 135 minute running time, and they remain varied, well choreographed and increasingly tense. There’s a constant feeling of threat, and Ayer is quick to underline how little protection a thick metal shell on wheels can offer in a variety of circumstances. As well as crafting a succession of thunderous action beats, Ayer also explores the beauty (an aerial dogfight, seen from the ground) and the tragedy (dead bodies being almost bulldozed into graves) and despite the predominantly brown palette, Ayer makes effective use of his countryside. He’s also taken great pains, from the practicalities of maintaining a tank in a live environment to the studiously researched tracer fire that lights up the later battles, to make the film as grounded as possible and to emphasise the constant sense of threat, even so close to the end of the war. What these repeated sequences drive home-  with the effectiveness of an armoured Panzer division but also about the subtlety – is that war is hell, even when it’s nearly won, but it can be gripping to watch as a bystander.

When Fury does fall down is just about any time it opens its mouth. Ayer struggles to find the pathos among the madness, and he fails where so many war movies have succeeded in that the nominal heroes are not just borderline dislikeable, but apart from Pitt and Lerman they are, to a man, crushing bores. It’s also a confused film, indicated nowhere more clearly than by an extended sequence that sees the crew take dinner and comforts from the house of two German women. The whole sequence feels like it’s meant to illustrate the futility of war and the search for simple humanity in the midst of battle; what it actually does is get you rooting for the SS. Pitt’s performance is suitably stoic but none of the cast are ever permitted to put any shading into their performances, and you can constantly feel Ayer’s script straining for a profundity that never comes. There’s also a gnawing sense of déjà vu to the in-fighting between the crew, not helped by Stephen Price’s score that sounds as if he’s been watching old submarine movies on repeat, right down to the male voice choir booming over half his score. Fury is more of a blind, swinging rage than a focused argument, and while the battle sequences will live long in the memory, you’ll want to forget much of the rest as quickly as possible.

Why see it at the cinema: For the tank battles, which will assault your eyes and ears in guiltily satisfying ways.

What about the rating? Rated 15 for strong bloody violence, gore, strong language. The gore wouldn’t be out of place in your average David Cronenberg film, but Fury gets a fifteen rating because shots of people’s gruesome injuries and dismemberments are only shown briefly. Don’t have nightmares, people.

My cinema experience: Seen at the Cineworld in Bury St. Edmunds on the opening Friday night, hence a sizeable audience. Hence I ensured I arrived in plenty of time for the film, as people don’t always respect the booked seats. Hence my disappointment when the adverts and trailers (or the Corridor Of Uncertainty as I like to call it) ran to 31 minutes, on a film with a two hour and fourteen minute running time. Hence my fury (well, mild disgruntlement) at not getting home until after midnight after a stop for petrol.