I mentioned yesterday one of the key reasons for me watching so many films in cinemas, being forced to watch films in one sitting as an antidote to my short attention span. I also collect audience reactions, from massive gasps in thrillers to stunned silence at dramatic twists (see here for more examples of my favourites). Monday threw up a host of opportunities to add to my collection. 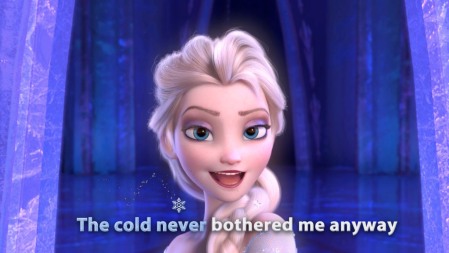 While I saw Frozen twice in cinemas last year, once for Bums On Seats and once with Mrs Evangelist, I wanted to get to something at the Family Film Festival and not having any children of my own, this seemed the best option to get Mrs Evangelist back to. Also, being a singer it’s a great way to combine two of my favourite passions. As a film, I’m still as much of a fan as I was when I saw it last year – it comfortably made my top 40 last year – although the problems become more pronounced, including the odd structural deficiency and the fact that all the central female characters have the bodily characteristics of aggressively sexual Barbie dolls. Despite that, I stand by it being my favourite Disney animation (excluding Pixar) since the heyday of the Nineties. (The Score: still 9/10.)

Audience reaction: was a joy to behold, mainly because the number of unaccompanied adults in the screening was in single figures. I was a little concerned that the kids weren’t into it, as they didn’t start singing – but then how many kids are going to wander round the house singing Frozen Heart (The Ice Workers’ Song)? As soon as we got to Do You Want To Build A Snowman? the choir of 200 young voices kicked in, and not only did they sing the songs, they said the words in the songs and they even made the sounds effects in the songs. What became apparent was that Mrs Evangelist and I didn’t know the songs anywhere near well enough – she gave it her all in Let It Go (which I also sang in my best falsetto so as to blend in; apologies to anyone in the rows in front who thought they were being haunted by a Bee Gee) and I also managed Olaf’s song In Summer, but a full purchase of the soundtrack is clearly required before we attempt to make it to one of the grown-up sing alongs at somewhere like the Prince Charles in London. And yes, we will clearly be doing that, judge me all you like. 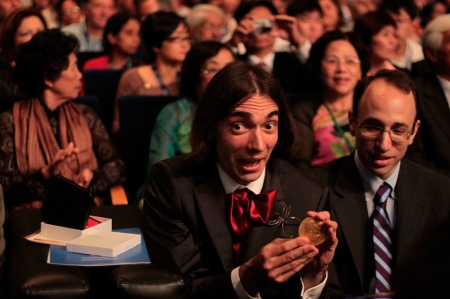 Or, how I came to not really like How I Came To Hate Maths. It’s nominally a French documentary, although given that around 49.4% of the mathematicians featured are English, there’s certainly an international flavour. I’m a mathematician by training, having done it at GCSE, A Level and degree level, so I approach any scientific documentary with a keen interest. In theory this documentary should have been a no-brainer; mathematics is divided into those people like me who are good at it and enjoy it, and normal people who hate it. However, there were two major flaws: firstly, in setting out to prove any mathematical theorem you should clearly show your workings, and there was no consistent flow of ideas.

This is almost an anthology documentary, which covers chapters on problems with the curriculum being taught in French schools, issues with the subprime mortgage market, the fields of advanced mathematical research and so on, and the underlying purpose is muddied at best. More critically, the documentary never manages to come close to helping those in the “normal person, hate maths” understand why maths is so cool to those of us in the other camp. A few interesting insights in the individual sections, but a missed opportunity.

Audience reaction: this one was a sell-out, but the general shuffling and coughing throughout gave clear indication that I wasn’t the only one truly gripped. As soon as the credits began to roll, so did the stampede for the exit. 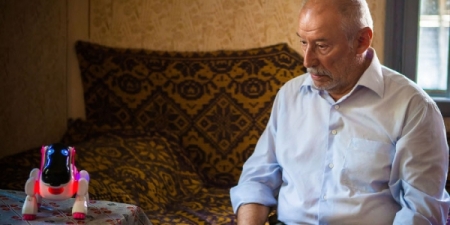 I’ll be honest, my thoughts on picking this out of the programme were that the single frame looked more cheerful than anything from any Romanian film I’d previously seen. I would say that’s not an entirely bad reflection on Romanian cinema, as the films I have seen, especially those from Christian Mungiu, have been of the highest quality, but mostly they’re about as cheerful as a wet weekend at the end of the pier eating congealed fish and chips, and that’s the upbeat moments. All this, though, does a disservice to The Japanese Dog, which while slight, peaceful and about as eventful as a trip to the shops to buy a stamp, still wove a certain spell over me on a Monday night.

Costache (Victor Rebengiuc) is a man who’s lost almost everything in a flood in his village, including his wife. He mopes around and begrudgingly accepts offers of help, but dawdles over selling his now worthless plot of land. A visit by his estranged son and his family gently thaws his demeanour, as he bonds with the grandson he’s never met. At an hour and a quarter and barely two acts in terms of narrative structure, The Japanese Dog is unlikely to offend but it’s also equally likely to not linger terribly long in your memory. It is beautifully acted, the camera work is minimal with a richness to the cinematography and the script suggests beats and moments rather than bogging itself down in exposition. It’s a lovely character study that purrs rather than barks, as long as that’s your thing.

Audience reaction: one of those great moments when not a single member of the audience moved for the exit before the end credits were up, possibly induced into a trance-like state. 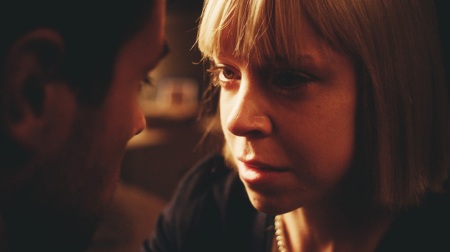 The last film of the day was one of two horror films screening at the festival that I’d managed to miss at the earlier FrightFest. David (Rupert Evans) is a film archivist living with his wife and son – and if you can tell me what his son’s accent is supposed to be, I’d be most grateful – but he’s got two problems. Firstly, his wife (Hannah Hoekstra) is almost certainly having an affair with a dashing looking client, and secondly one of his latest pieces of archive film shows his house being the setting for a brutal murder in 1902. When his wife is found dead in the local canal, the detective on the case (Steve Oram) wades in with all the subtlety of a sledgehammer smashing airhorns and accuses him of the murder, while David is obsessed with both the house and the canal and what haunted secrets they might be keeping.

I really didn’t get on with The Canal; the script recycles a few horror ideas done better elsewhere and it relies heavily on jump scares from overcranked sound. The acting is also dreadful in places, with Rupert Evans reduced to little more than a damsel in distress in trousers and the likes of Antonia Campbell-Hughes (pictured) and Steve Oram misjudging either the tone or their performances – or both – rather horribly. Oram in particular feels like he’s wandered in from a bad parody of The Sweeney, and as a consequence The Canal never resonates and becomes dull long before the final stretch.

Audience reaction: am impressive amount of jumping from a few very nervous rows sat behind me. I will confess to having jumped a couple of times myself, but both were early on before the tedium set in. I couldn’t possibly confirm or deny rumours that festival director Tony Jones was creeping around the back rows in a William Castle-esque attempt to add greater scares, but based on the quality of the film it would only have helped if he had been.

2 thoughts on “Cambridge Film Festival 2014 Day 5: Frozen Singalong, How I Came To Hate Maths, The Japanese Dog, The Canal”

[…] cinema to find it practically deserted. Once the crowds from the second sold-out screening of the Frozen sing along had subsided, the festival had become eerily quiet. There were still reasonably crowds in many of […]