Film4 FrightFest 2014 Day 1: The Guest, Sin City: A Dame To Kill For, Zombeavers

For the past two August Bank Holiday weekends I’ve entertained myself with a day at Film4 FrightFest, quite possibly Europe’s most prominent horror film festival and now in (I think, too lazy to Google, sorry) its fifteenth year this year. I’d originally started going after looking for a replacement event when Empire Magazine’s various summer conventions stopped three years ago, drowned under ticket debacles and poor organisation from third parties involved in setting up the events. (I’d gone from BIG SCREEN to a big scream, if you will.) This year, with a bit more free cash flow and Mrs Evangelist already otherwise engaged over the weekend, I decided that maybe I could manage a couple of days. Then I discovered that I was otherwise engaged on the middle Saturday, thus ruling out the day I’d gone for the past two years. Through a combination of indecision and a willingness to spend money without thinking, I have somehow this year ended up with three day passes (Thursday, Sunday and Monday), as well as two single tickets for Saturday evening once my other commitments are done.

Last year, I’d finished off with mixed emotions. The final film, Cheap Thrills, is probably the most enjoyable I’ve seen in my two days at the festival, but it was preceded by an announcement that the cinema we were in, the main screen at the Empire Leicester Square, wouldn’t be there in its present form by next year. The main auditorium (left) was 1,300 seats, and despite being a complete cavern with poor acoustics, once the place was packed and watching a great film it came alive; it even made R.I.P.D. seem reasonable, so it must have been doing something. Since then, we’ve learned that it’s been replaced by an IMAX screen, and while it’s great to now have one directly in the West End, it just doesn’t have the capacity of the old venue (having been split in two as part of the IMAX development). So this year the festival has shuffled down Leicester Square to the previous venue of its all nighters, the Vue West End.

The move has not been without teething difficulties: even with three screens, rather than one, the seating capacity is down by a couple of hundred seats and many attempting to book day or weekend passes endured significant difficulties. These seem to have extended to opening night, as I saw several instances of people discussing with cinema staff how they weren’t in their expected seats and in some cases, weren’t even in the same screen as their friends. This could prove interesting as the films are looping round the three screens, so it may take half a day for everyone in the three main screens to have all seen the same films. There are definite pluses, with the screen capacity for the two Discovery screens now significantly increased, and the festival has also taken over the bar area. You’re also still slap bang in Leicester Square, so the possibilities of popping down the square and ramming your face full of sweets between screenings at the freakish M & M Store still remain.

Anyway, my judgement got the better of me, and I booked a Thursday evening pass before discovering I was in a meeting at work in London the same day. I managed to escape my office, in the shadow of St. Paul’s Cathedral, around 17:55 and then embarked on a perilous and potentially decapitating trek across a soggy London in rush hour, waving my rusty umbrella in the faces of anyone who dared block my path. Apologies if I did manage to have any heads off or eyes out with my umbrella, but it was all in a good cause and much in the spirit of the occasion.

First up was The Guest, the latest from American director Adam Wingard. Wingard has contributed to anthology films including the first two V/H/S sets and The ABCs Of Death, as well as giving us last year’s well received country house thriller You’re Next. Wingard has a trump card for The Guest in the shape of Dan Stevens, who you might know better as Downton Abbey’s Matthey Crawley. I don’t know Downton at all, but on this evidence I might be tempted to give it a go. Stevens is David, a soldier who’s just been discharged from the army and calls in on the family of a recently deceased fellow platoon member. He’s invited to stay and quickly ingratiates himself with the family, winning over the sceptical father (Leland Orser) and handing out an ass-whooping to the school bullies threatening son Luke (Brendan Meyer). It’s only daughter Anna (Maika Monroe) who starts to suspect David might just be too good to be true, but as local reports of trouble turn to corpses, she might not be able to convince her family before it’s too late.

Where You’re Next was aiming for old-fashioned chills in a dark country mansion, The Guest is lighter and airier in almost every sense. There’s a slow-burn set-up before a second act sequence reveals the true nature of the family’s visitor. That sequence is so packed full of clichés that you’d almost think it was stock footage, dropped in purely for exposition, and there’s little to surprise in terms of plot developments, but it does pay off later in the film with some bombastic gun battles. The Guest is absolutely Stevens’ film, as he swaggers, broods and brandishes his butter-wouldn’t-melt grin, an avenging anti-hero roaming through the town and having huge amounts of fun in the process. Many of the laughs are knowing, but none the worse for that, and by the climax – set in the Hallowe’en dance at the local school, naturally – the perfect pay-off to a supremely entertaining dark comedy. The only shame is that it was shown at tea-time on a weekday, as it should best be enjoyed late on a Friday night with a beer in hand and a few mates for company, but the FrightFest crowd still lapped it up.

Sin City: A Dame To Kill For 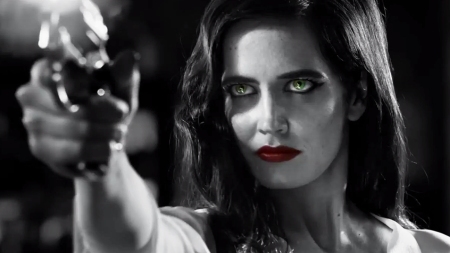 Somehow Robert Rodriguez and Frank Miller have managed to prevaricate for nine years about pulling together a follow-up to their genre defining, über-stylised noir Sin City. The closest anyone had ever come to ripping the pages of a comic book out and pasting them onto a cinema screen, it inspired a thousand imitators but its green-screen driven, washed out aesthetic and mix of stark primary colours against the black and white framing left a mark that’s been difficult to erase from the memory, but also nigh-on impossible to replicate. Rodriguez and Miller have had a second attempt to capture lightning in a bottle, this time with Miller contributing two new stories to further adaptations of his own comic books, and with a story structure that attempts to function as both prequel and sequel to the original anthology.

Consequently, a mixture of characters return from the original, with Mickey Rourke, Bruce Willis, Rosario Dawson, Jessica Alba and villain Powers Boothe cropping up again, while others have been recast either due to death (Michael Clarke Duncan being replaced by Dennis Haysbert) or narrative reasons (Clive Owen now benched in favour of Josh Brolin). Most notable newbies this time are Joseph Gordon-Levitt and Eva Green, and the cast is further fleshed out with the likes of Ray Liotta, Juno Temple, Christopher Lloyd and even Lady Gaga in small roles.

As valiant an effort as it is, sadly the magic from the original doesn’t sustain to the same level here. Sure, there are plenty of individual moments that titillate or thrill to some extent, but the plot seems to be working against them forming a coherent whole. The chapter style feels more choppy than it did first time out, and if you’ve not seen the original recently I’d suggest a little homework might be in order to keep track who’s done what to who and who knows who might just help. Green is the most effective addition to the cast, devouring any man within a five mile radius and flaunting here curves against some (almost comedically convenient) shadows covering up her lady bits.

Tonally, this follow-up has more flashes of Machete and its sequels, Rodriguez’ other pet project since the first film, and the all-pervading sense of gloom and the brutish noir feel of Sin City are replaced by something which feels that, if left alone, it would have sagged into full-blown parody after another half an hour. There’s also a great trick of Miller’s script attempting to empower the female characters but still coming off as weirdly misogynistic much of the time.Oddly the 3D, while being expertly realised, works against the mood and heightens the plastic artificiality to the detriment of what’s being attempted in a narrative sense, and it also increases the “uncanny valley” feeling of the eyes of many of the leads; especially bizarre when these are real people, not CGI constructs. A moderately pleasing follow-up, then, and one that will grate or irritate as often as it impresses.

Zombeavers doesn’t waste any time setting its stall out: a pre-credits sequence which features two idiotic truck drivers engaging in weird banter before running over a deer and, in the process, spilling dangerous chemicals over possibly the most fake-looking animatronic beavers ever captured on film. Zombeavers is a B-movie in heart, soul and beaver. At 76 minutes it (just about) doesn’t outstay its welcome, throwing in just about all the tropes you’d expect and leaving out all the originality you’d expect as well. Very much a midnight movie that’s a cut above the normal level of quality and laughs you’d get from a SyFy channel-type movie, but it never quite manages to get past the one joke of its premise. The highlight for me was the gloriously inappropriate Sinatra-style song over the closing credits, but the rest of Zombeavers still manages enough moments of bitey, rabid looking fun to make it worth a watch.

Friday was a work day for me, but I’m back in on Saturday for The Babadook (which, on seeing the trailer, caused the person sat behind me to develop Tourette’s though fear alone) and Life After Beth.

[…] I was thoroughly excited by the prospect before it all started, but having only just finished blogging about FrightFest yesterday morning and then gotten in the car a few hours later to start all over again, I’m […]