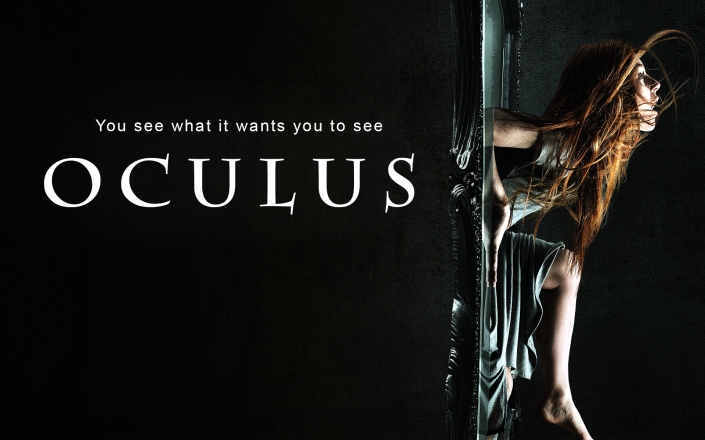 The Recipe For An Old School Yet Still 21st Century Horror Movie:

1 selection of other standard principles of horror movies

1. Take a short film made eight years ago and allow a director with an unproven track record in feature films to expand that short into a full length feature script.

2. Base your script around a high concept – say, a haunted and possibly possessed mirror – that’s simple enough to understand yet hasn’t been used yet (other than in your short).

3. Cast two actresses well known for roles in niche genres (in this case science fiction) to ensure you’ll draw in a crowd based purely on their casting. One of them can be well known for a family sci-fi show, but this should still be enough to get a decent crowd through the door and guarantee you a return on your investment.

4. As with good Italian cookery, use a small number of high quality ingredients; other than the two actresses, no more than another four or so characters in the main cast should allow you to keep focus on the plot.

5. Ensure you do your preparation early. Give one character all of the exposition behind your high concept and get her to deliver it all in a rapid fire manner in the first act, giving plenty of resting time and allowing the film to breathe. Remember to remove the exposition once you’ve used it, so as not to distract from what you’re trying to achieve in the film’s present.

6. Stir in your small selection of horror devices, mainly jump scares and gory moments, but spread them evenly through the mix for the most effective results. You should also be able to work in a number of other horror conceits, including flashbacks, foreshadowing, blurring of fantasy and reality and characters who look otherworldly and stand in the back of scenes not speaking. (Ideally give them all creepy contact lenses to increase the otherworldly feel.)

7. Allow to simmer for about an hour, keeping the film on a low light level to allow the tension to rise naturally; you need to avoid the tension dissipating like an overcooked soufflé.

8. Gradually ratchet up the tension levels, which should slowly draw good performances out of your leads once the exposition has been delivered. Using a director with an editing background should also keep scenes moist and tasty.

9. You will need to gradually sift in your willing suspension of disbelief, given that the lead character’s plan is ill-advised and you would expect reasonable people to abandon it long before the characters here start to have doubts.

10. After an hour and a half, you should be ready to add the denouement icing. If your mix of ingredients has been good enough, your audience may even be prepared to overlook a slightly rushed climax that feels true to the concept but slightly underwhelming given the build-up.

11. Serve in multiplexes and other mainstream cinemas, and expect your lead actress to go on to appear in a major comic book franchise and a terrible-looking American sitcom.

Why see it at the cinema: For a film so entirely reliant on mood for you to get the best out of it, there’s no better option than finding the darkest room possible, with the loudest and best sound system and a screen that encompasses your field of vision, totally immersing you. I think they call them cinemas. Who knows, there might be one near where you live?

What about the rating? Rated 15 for strong bloody violence and horror. Yep, just in case you hadn’t worked it out for yourself, this film contains horror. Thanks, BBFC.

My cinema experience: With my wife on a training course and me giving her a lift, I took the chance to spend the time between pick-up and drop-off at the cinema (in this case Cineworld in Huntingdon). Consequently, this gave me a chance to undertake one of my favourite occupations in cinema: watching a horror film in a darkened cinema at 10:30 on a Saturday morning.

This was the first time I’d experienced Cineworld’s new allocated seating policy in the cinema, and the person at the concessions stand selling me my ticket asked where I’d like to sit. My preference is always for somewhere with legroom, so I normally go for aisles or the front of blocks unless the seats are particularly spacious. When I got into the cinema, I was given a seat that was four rows from the front of the block and five seats in from the aisle, and with as little legroom as most of the seats in the cinema. Not an auspicious start for the new policy.