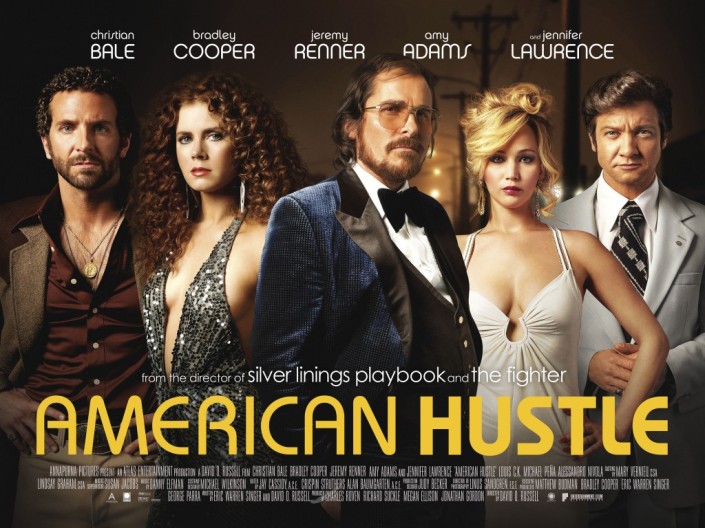 The Review: I used to worry about my looks. When I was younger, I developed a beer and crisp-based pot belly, had teeth lifted straight from any American stereotype of Brits and my height had given me a weird hunchback from repeatedly bending over to talk to short people (i.e. everyone). One thing I’ve never had to worry about is my hair, which might sit somewhere on the strawberry blonde spectrum but it’s all mine and while many of my contemporaries have receded or gone completely bald, I’ve still got more than I know what to do with. Maybe it says something about us as a society that so much of the publicity for this film has been devoted to the hair, but it’s also possibly because the film makes such a fuss of it too. From the very first shot, which sees Christian Bale – pot belly, check – struggling to wrangle his unwieldy combover, American Hustle is keen to flaunt its Seventies stylings and the hair can also tell us a lot about the characters.

Take Christian Bale: his Irving Rosenfeld is a shady dealer, with fingers in every pie in the area and most of them as dishonest as the matting of wispy hairs he uses to hide his balding pate. He soon falls for the wily charms of Sydney Prosser (Amy Adams), her taste for the high life reflected in her lengthy, sweeping curls. As they cheat and swindle their way through the citizens of New York, they miss the signs from the uptight, permed curls of FBI agent Richie DiMaso (Bradley Cooper) who sees through their scams – well, some of them – and puts them to work helping to bring down the rich, powerful and corrupt, even if they’ve got the honest, hard working hair that Mayor Carmine Polito (Jeremy Renner) has. Amid it all, Irving’s young trophy wife Rosalyn (Jennifer Lawrence) and her attention seeking updo might be the spanner in the works, the most unpredictable element in crosses and double crosses that threaten to spiral out of control more than Amy Adams’ party hair.

David O. Russell is forming a reputation for being an actor’s director, and on that front he succeeds admirably. Those faring better are the The Fighter alumni, Christian Bale and Amy Adams, who take a firm grip on the film and never look likely to let go. Bale’s usual physical transformation shows a typical absence of vanity, but he nails the more comedic tone superbly. Amy Adams once again shows, as she did in PTA’s The Master, that she can more than hold her own in male dominated casts and switches from powerfully sexy to fragile and vulnerable as required. Those coming back from Silver Linings Playbook are slightly less successful, Bradley Cooper just dialling up the performance to indicate frustration and Jennifer Lawrence feels a good ten years too young for her role (despite being as enjoyable as ever to watch). Jeremy Renner does exactly what’s required of him with little opportunity for more, while the stand out in the supporting cast is Louis CK’s long-suffering boss of Bradley Cooper.

But, as with Silver Linings Playbook, a collection of strong performances don’t necessarily add up to a great film and while American Hustle isn’t aiming to be as profound or emotional and does hold together better, it is the cinematic equivalent of Christian Bale’s elaborate combover. While it’s never less than fascinating to watch, it’s lacking in substance and unsatisfying the closer you get to it, and it in the final analysis it feels wispy and thin. While you don’t have to have depth to have quality, American Hustle always has the feeling that it thinks it’s better than it is, and in particular the ending is aiming for clever twists that feel disappointing and obvious. David O. Russell is capable of films with urgency and immediacy such as Three Kings, but other than a sense of period American Hustle lacks any sense of visual panache that would help elevate it to the pantheon of Great American films. Maybe, then, it’s not surprising that American Hustle should be a little (hair)style over substance, but will work if you set your expectations to somewhere between enjoyable and forgettable.

Why see it at the cinema: It has a certain swagger, and it’s consistently entertaining, but David O. Russell isn’t quite the visual stylist of a Scorcese or a Soderbergh. The casino sequences are probably the visual highlight, but lovers of Seventies music will appreciate the soundtrack on a decent cinema sound system.

What about the rating? Rated 15 for strong language. Not affecting the rating significantly, there’s also some violence in the dark and some drug taking that “isn’t remarked upon.” Remember kids, just say no(thing).

My cinema experience: A packed Saturday evening at the Cineworld in Cambridge, and an audience that by and large seemed a little disappointed as they filed out at the end.

One thought on “Review: American Hustle”