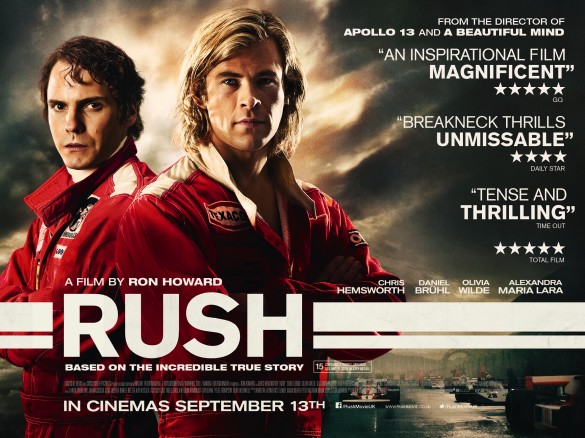 The Review: Formula One. Outside of America and its Indycar obsession, it’s still regarded as the pinnacle of four wheel vehicular competition, commanding global audiences of around half a billion people a year and generating enough sponsorship and investment to make your eyes water. What it’s often lacking in is drama, especially as Sebastian Vettel’s dominance this season has left his rivals trailing in his wake. To someone like me who’s not a passionate fan, it feels a sport that’s become more about the machines than the men, and somehow the sense of drama that should exist when six of the last ten competitions haven’t been settled until the final race has been lost (and especially when in five of those six, the final winning margin was four points or less). Watching the 2011 documentary Senna now feels like a lost era with its fierce competitive rivalry between Ayrton Senna and Alain Prost the stuff of half-forgotten legend. For those that can cast their minds back a few years further, they may remember a similarly close battle from 1976 between English playboy James Hunt and his Austrian rival Niki Lauda.

Chris Hemsworth portrays James Hunt with all the swagger of a man who’s made a career playing an over-confident demigod, but that in itself may be a just and true analogy for the perception racing drivers have of themselves. We see Hunt battered and bruised initially, not from racing injuries but from the attentions of a jealous husband, and Hunt even manages to get his end away before he’s left the hospital. Rush tracks his gradual rise from the petrolhead larks and raw ambition of Formula Three in the early seventies to his entry to Formula One and his battle to get a seat in a car worthy of his perception of his own talents. His story is told in parallel with that of Lauda (Daniel Brühl), who similarly rebels against his upbringing to fulfil his high octane dreams. Where Hunt is the loose cannon getting by on raw talent and rough-edged charm, Lauda is the technical genius who gets his edge from tuning the cars, but has a more clearly defined concept of acceptable risk in one of the world’s most dangerous sports. The film starts with a flash forward to the pivotal moment of their most heated battles, the 1976 Championship, and the German Grand Prix at the Nürburgring where the debate over risk came to a potentially deadly head.

Hemsworth and Brühl dominate the screen and the film, Hunt’s golden locks and cheesy grin the perfect counterpoint to Lauda’s mousy overbite and personality deficiencies. Hunt sees the world and Formula One as much as a popularity contest and is in it for fortune and glory, Lauda sees the thrill of the chase and the challenge of competition but the similarities are clearly and obviously laid out. Hemsworth and Brühl are both excellent, and backed up by an eclectic supporting cast which seems to have been drawn from a mixture of the Green Wing casting director’s little black book (Stephen Mangan and Julian Rhind-Tutt being two of Hunt’s crews over the years). The other notable roles are the women in the lives of the two drivers: Alexandra Maria Lara provides a soft yet believable counterpoint to Lauda’s brusqueness, while Olivia Wilde is almost unrecognisable with a well-tuned English accent and blond hair as Hunt’s upper class marriage of convenience. As with director Ron Howard’s previous factual collaboration with writer Peter Morgan, Frost / Nixon, the performances steer the right side of caricature and serve to sell the drama.

The real strength of Rush lies, initially surprisingly, in Ron Howard’s depiction of motor racing, which captures the globe-trotting breadth and lavishness of the sport, even in the Seventies, but also puts tension and excitement into every overtaking manoeuvre and clash of wheels, and uses the internal mechanics of the cars and engines to create a throbbing pulse to help raise the heart rate. Howard has previously shown a gift for grand scale drama and nerve shredding tension with Apollo 13 and many of the key moments of Rush are no less effective. Having engaged your senses, when the real drama comes it it emotionally affecting, but that’s despite Peter Morgan’s script, not because of it, Morgan’s lumpy cliches feeling wrong coming from the mouths of drivers rather than politicians or journalists. Every good racing team is backed up by a good pit crew, and if Morgan lets the side down somewhat then it’s more than made up for by the cinematography of Danny Boyle regular Anthony Dod Mantle and composer Hans Zimmer who elevate even the most mundane moments of the pit lane. The unfortunate conclusion it’s tempting to draw from comparing this to modern Formula One is that a part of the thrill of earlier racing was that almost ghoulish thrill of the possibility that each driver’s race might be their last, which commendable standards of modern safety have somewhat compromised. Whether you subscribe to that view or not, Rush provides the same thrills of the best of real sport, safe in the knowledge that no actors were harmed in the making of this movie.

Why see it at the cinema: Ron Howard’s managed to take something which can be as dull as dishwater on TV, and create a sense of excitement not only from narrative twists but from the visceral thrill of delicate and overpowered machines careering round corners and jostling for position, and you couldn’t ask for a better depiction of the sport on the big screen. Find somewhere with a decent sound system as well, to get the most from the growl of the engines and Hans Zimmer’s typically bold score.

What about the rating? Rated 15 for strong language, sex and bloody injury detail. A fair rating, but fans of casual nudity and / or Chris Hemsworth won’t be disappointed.

My cinema experience: The joys of screen 9 at my local Cineworld in Cambridge. Quite often I’m perched on the end of rows, for one of two reasons: either I’ve taken Mrs Evangelist, and she inevitably has to factor in a comfort break so being on the end is convenient, but even on my own I’m almost six foot three and I’m not easily accommodated for leg room. Screen 9, however, is the largest at that particular Cineworld and one of the few cinemas where I can sit in the middle of a row and still have ample legroom. A decent sized crowd on a Saturday lunchtime all seemed to come away having enjoyed themselves.

One thought on “Review: Rush”

[…] missed something, or where you can berate me for not selecting Stories We Tell, Frances Ha, Rush, Zero Dark Thirty, Blancanieves, No, Blue Jasmine, Les Misérables or any of the other films I did […]