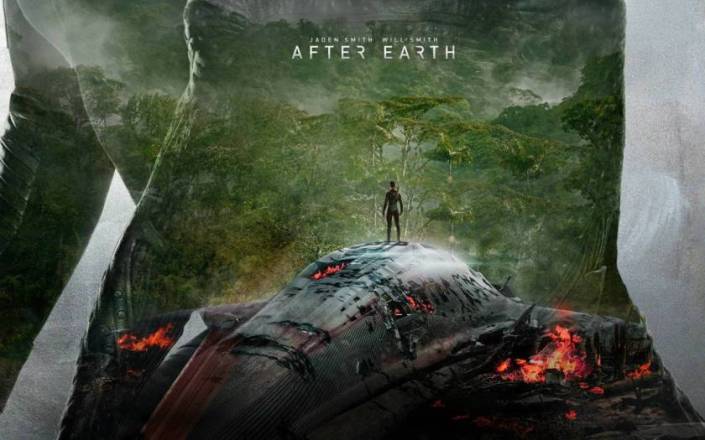 The Review: Can art actually shape the future? Do the science fiction works and films of our present shape our own destiny? If After Earth turns out to be a remarkably prescient vision of our future, then we can look forward to life on distant planets, being ravaged by creatures that hunt us by our fear and replacing doors with curtains. Yes, M. Night Shyamalan, master of the twist movie but whose career has seemed on a downward trajectory ever since The Village dispensed with credibility in the name of unexpected plot developments, has teamed up with the Smith family of Will and Jaden to produce a story inspired by Smith Sr.’s late night TV watching. The story of a car crash where a son sets out to get help for his stricken father drove Will to wonder how this would play out a thousand years hence, and he felt M. Might’s particular sensibility would be an ideal match to this particular story.

So the story itself is simple, delivered with a small dollop of initial exposition where we learn that the fantastically named General Cypher Raige (Will Smith) has become the first person to be able to defeat the Ursas, predatory creatures used to kill humans who are blind but sense by detecting fear pheromones. Able to put fear aside, in a technique known as ghosting, Raige is a military hero, but his son Kitai (Jaden Smith) has failed to repeat this success, having failed in his own bid to enter the military. Circumstances contrive to throw the two together, and when their ship crash lands on a distant and dangerous planet it not only leaves Cypher injured but the dangerous Ursa they were transporting on the loose (yes, they really were transporting a lethal creature to be able to train their troops), and Kitai must set out on a quest to save the two of them and overcome his own fears.

Twists or not, Shyamalan’s storytelling has been backed up by deliberate pacing and an understated visual style, neither of which would seem to lend themselves particularly to a ninety minute science fiction film. What he’s also done with an alarming regularity is make some reasonable actors look quite poor. Regrettably, Shyamalan brings all of these gifts to bear on After Earth, filling Jaden’s cross-country journey with the urgency and passion of a half-hearted jog for the bus in the rain. Both Smiths also emerge from this with little credit, both having given significantly better performances in the past. It’s a toss up for which comes over as more embarrassing: the opening exposition delivered by Jaden makes it sound as if English isn’t his first language, and possibly not his second, but it’s outcringed by Jaden and Will having a father / son discussion in the crashed ship, where Smith the younger has the pained of expression of someone who’s just smelled the world’s most unpleasant odour and Smith the elder the countenance of a man who’s responsible for creating the smell, but will never ever admit to it. Award winning acting this is not.

It’s all over mercifully quickly and reasonably predictably, but a few nice moments and some breathtaking scenery are what save this from complete mediocrity. Even in his worst films, Shyamalan’s been able to conjure up moments of drama or tension and he does manage a few brief set pieces here which just about redeem the whole enterprise. It’s a frustration that Shyamalan still feels as if he’s got a good film or two in him, but The Sixth Sense and Unbreakable feel a desperately long time ago now and projects such as this – which feels inescapably like a Will Smith vanity project run amok – are not doing him any favours. The Smith family are more likely to shake this one off, but let’s hope that what lies in everyone’s future is more compelling than this. (And doesn’t have curtains for doors.)

Why see it at the cinema: Sony Pictures’ first film shot and projected in 4K digital, there’s a crispness to the imagery which generally works well, but for every beauty shot of ash falling at the top of a volcano, the digital process exposes other flaws, such as CGI monkeys who don’t appear to have evolved since Jumanji.

What about the rating? Rated 12A for moderate violence, threat and injury detail. Younger children are more likely to be bored than scared or scarred.

My cinema experience: Had a catch-up day at Cineworld Stevenage, taking in five films that I’d otherwise managed to miss. Consequently After Earth was my 10:30 a.m. warm up, and I was surprised to see a decent crowd (almost two dozen people) happy enough to make the early morning trip. They all stayed to the end as well; the one walk out just taking a very late toilet break, it transpires. It was at least enough to warm me up for a better day, and the projection was well served by the digital photography which looked great on the big screen.

2 thoughts on “Review: After Earth”