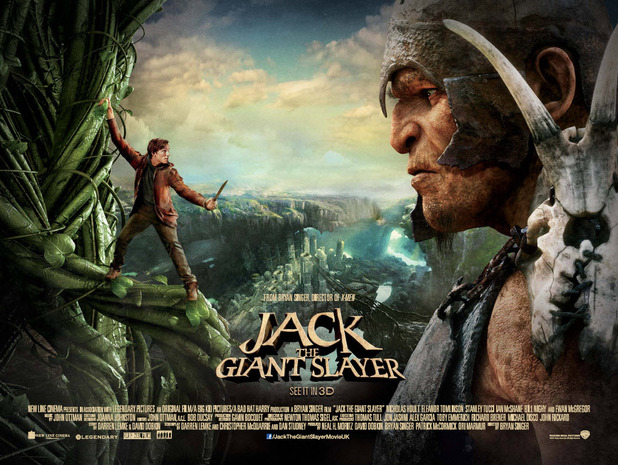 Fee-fi-fo-fum,
I smell the blood of some Englishmen,
And also a Scot, but mainly a Yank,
The director whose efforts we now have to thank
For bringing this fairy tale brashly to life;
But fantasy movies, once scarce, are now rife,
So is this another Lord Of The Rings,
Or just some half-hearted fantasy mings?
Fee-fi-fo-fudget,
They’ve really not skimped when setting the budget.
A director who once shone with limited means,
But now Bryan Singer’s got more than old beans.
So how come the CG looks rather unfinished,
The threat of the giants being somewhat diminished
By their poor design, their look unrealistic
And not just their looks that are far too simplistic
Fee-fi-fo-farrative,
The original Jack’s not a complex narrative:
Jack sells cow for beans, beans grow big,
Jack turns out to be thieving pig.
This Jack’s less concerned with harps and gold coins,
Instead it’s a princess that’s stirring his loins,
So Jack’s a good lad, and does what he oughter,
And heads for the giants to find the king’s daughter.
Fee-fi-fo-fenanigans,
This slayer has no greater plot shenanigans,
It’s tweaked motivations, but still such a story
Could muster a framework for fairytale glory
But it’s hard to know who’d  appreciate Jack,
The tone skews too adult, it’s all out of whack;
The battles are no match for Middle Earth conflicts,
The characters weak and the tale never quite clicks.
Fee-fi-fo-ferformances,
This film is a dead weight of earnest performances,
Hoult and McGregor are likeable leads
But seriousness isn’t what this fable needs,
It’s just Stanley Tucci that finds the right tone,
But his scenery chewing stands sadly alone,
And even the giants are flat and annoying
There’s not much of anything for your enjoying.
Fee-fi-fo-fum,
This lavish folly is just a bit rum,
It’s all inoffensive, occasionally pretty
But story wise never surpasses just bitty.
Now Singer and Hoult will soon reunite
On X-Men; Singer did more than all right
Telling mutant tales, and maybe that’s where
He should stay; for his Jack I just don’t care.

Why see it in the cinema: The last act is certainly epic – more epic than the first two, anyway – although it feels as if more happens than actually does at times. But certainly the cinema is the best place to appreciate the spectacle, one of the few saving graces.

Why see it in 3D: It does ensure that the tiny characters look far away on occasion, helping to add to the effect, but movies from the LOTR trilogy to Honey I Shrunk The Kids have managed without 3D, and despite being shot in the format there’s very little to require you to pay the premium for the indoor sunglasses. Speaking of which, there’s also been little done to address the brightness issues so some sequences, such as Jack’s cabin, look murkier than a giant’s underpants on wash day.

What about the rating: Rated 12A for moderate fantasy violence and threat. That may be the biggest flaw in Jack The Giant Killer, for the moments that justify that rating are few and far between, and you can’t help but think this would have worked better with a lighter tone and a pitch for the upper end of the PG market.

My cinema experience: A sparse Saturday tea-time crowd, but thankfully sound and projection were both decent. No one hung around when the credits rolled.

The Corridor Of Uncertainty: As is often the case with a 3D release, an extra trailer with a dog reminding you to put on 3D glasses bumped the running time up that bit further, so it was 26 minutes before Jack started slaying giants.

One thought on “Review: Jack The Giant Slayer 3D”

It’s a fun movie and if that’s what you go in expecting, then you’re going to be happy. At least that’s what I went in feeling like. Good review.