London. City of dreams, land of opportunity, where everyone is 19% more good looking than elsewhere in the country, where you might have to remortgage your house to be able to eat at the best restaurants and home of the most diverse range of cinemas known to man. I’m a country mouse in blogging terms, stuck up here in the Fens with good quality cinemas all around but missing out on the advanced previews and shiny, star-laden premieres of Leicester Square and the like. Even in the West End, though, there’s a difference between the mainstream and the art house, and if you’re looking for something more thought provoking and stimulating then you could do worse than seek out the Institute of Contemporary Arts, tucked away from the bright lights, stale popcorn and over-inflated prices of Leicester Square as it is on The Mall. But it’s also been the occasional home for the past couple of years to Ultra Culture’s imaginatively-titled Ultra Culture Cinema series.

Ultra Culture, or Charlie Lyne as he is known to people who don’t call each other by their Twitter usernames, might be a well known face to those who watch Film 2012 (or, more precisely, watched Film 2011 when he was actually on it), but sadly the format of the revamped programme has never given its contributors the chance to be themselves, so the better outlet for Charlie’s brand of insight and humour is undoubtedly his own show, and how better to do that in London with a stage show? Events like this are also a great opportunity to see films before their general release for plebs like me, so I can, on this occasion, get one over on Mr Joe Public. (Apart from all the people who saw it at the raft of other free public screenings earlier this week. Balls.)

This is the first time I’ve managed to venture down to London for one of these nights, but reviews of previous evenings seemed to suggest that we’d be treated to more than just a film. What I was treated to first was the the company of a familiar face from my visits to Empire’s Movie-Con / Big Screen events, so I didn’t have to spend the evening sipping my orange juice alone in the ICA’s trendy white cafe, which feels like it’s been decorated upstairs in the IKEA Clockwork Orange range. Which was nice. (Both the company and the decor, that is.) Said friend Marie also seemed to know about half the people in the bar, so it really did feel like a home away from home.

The other thing that also made me feel right at home was the preponderance of gingers. Almost as if some sort of subliminal redhead Pied Piper effect was at play, the presence of the nation’s premier red top film blogger, in the more literal sense, seemed to have been a rallying call for the auburn and the strawberry blond across the capital. If you don’t believe me, here’s the photographic evidence: 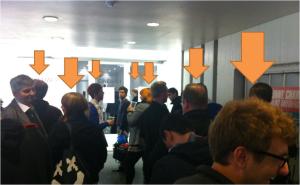 Given that the average proportion of those with a copper-coloured top in the general populace is 2 – 6%, it was clear that this was the hot ticket for those with hot hair. As a redhead myself, it was comforting to be surrounded by so many of my kind. If that wasn’t great enough, someone then moved through the crowd handing out Mini Eggs. Sometimes it’s the little things, y’know?

However, the one ginger that mattered was the one on stage, and at around the scheduled start time we were ushered in to take our seats. There was then a flurry of activity, as prizes were rapidly handed out for drawing on walls and other random achievements, but the core of the pre-movie entertainment was a short play, penned by Charlie himself. This might be misleading for two reasons: to suggest it was a play would suggest there were actual actors, rather than punters conscripted out of the audience to read the other parts from their scripts, and to suggest it was short might be based on Charlie’s original estimate of its duration (about 15 minutes) rather than its actual duration (nearer 40 minutes).

Four volunteers were brought up on stage to enact the story, a tale of how writer and director Rolfe Kanefsky made a self-referential horror movie called There’s Nothing Out There, featuring a character who knows that they’re in a horror movie, so has watched other horror movies so he knows “The Rules”. The play featured “Kanefsky”, as well as “Wes Craven” and a number of other characters, some with indecipherable accents, as well as live musical accompaniment played on the supplied instruments, including a saxoflute, a playmonica and a tambourine. Eat your heart out, Mark Kermode and the Dodge Brothers.

The highlights of the the “play” included some malfunctioning flame effects on the Keynote presentation which caused much disappointment in our host, but much cheering in our audience when it started working on the next slide, one of the male actors who appeared to start on the improv when it became apparent that one of the chosen actors would win the rest of the prizes, and the supporting actress taking the narration line “And now, Scream” far too literally and eliciting a high-pitched scream with impeccable comic timing, thus enabling her to walk off with that bag of prizes.

We were also treated to, as part of the play (which, thanks to its combination of Keynote speech, Charlie’s narration and the scandal of how Wes Craven may have ripped off Kanefsky, felt like the An Inconvenient Truth of self-referential horror movies) a run-down of Rolfe Kanefsky’s other works, including Sex Files: Alien Erotica, Jacqueline Hyde (say it out loud and it makes sense) and Emmanuelle in Wonderland, and we were also presented with the epic trailer for the high point of Rolfe’s career, The Erotic Misadventures Of The Invisible Man. Sadly, as this is a PG blog I can’t share the trailer for that with you – I’m also fearful of the level of spam that linking its trailer might generate from the kind of sites hosting it – but I can share the tralier for Kanefsky’s original meisterwerk, There’s Nothing Out There. (Yes, it’s not really PG either, but whatever.)

After all that, we got to watch a film, which for many people was the point of being there. There was also possibly the most shambolic intro from the talent ever witnessed, as Drew Goddard and star Jesse Williams bore a contorted look of confusion on their face as they attempted to understand what an “Ultra… Culture Cinema?” actually was, while in the middle of introducing it. My full review of the film is available here, but let me just say for now that The Cabin In The Woods is magnificent, and while it may not be totally the revolutionary deconstruction of the horror genre that some are claiming, it is both hysterically funny (my face is still aching 24 hours later from the laughing) and on occasion, properly scary. If you’ve seen the trailer and think you know what you’re in for, then you may well still be pleasantly surprised, and you’ll get nothing more out of me. The genuinely appreciative audience screamed, whooped and hollered at all the appropriate points, and made their appreciation known at the end.

We then all decamped to the bar again on the promise of a late licence, what people as old as me would call a disco and “Easter Presents”, although given that I had to have just one quick drink and head for the Tube back to my car, I didn’t see any presents. There is always the possibility that I misheard and it was actually an “Easter Presence” in the bar; if Jesus was around, I hope he enjoyed the evening as much as I did.

But would it not have been better just to have the film without all of titting around before and after? Frankly, no. The cinema experience is becoming lost and diluted, and in this age of 3D cinema and vibrating cinema seats attempting to keep punters putting our bums on their seats, actually a little bit of showmanship, an education and a right good laugh were the perfect warm up, got everyone in just the right mood for Drew Goddard and Joss Whedon’s epic and actually made the film itself even more enjoyable, if such a thing is possible. For anyone doubting what the cinema experience has to offer, or just hoping to eat Mini Eggs and draw pictures of horror movies in a room packed with gingers, then I strongly recommend giving the next Ultra Culture Cinema a try.

[…] films this year and he’s only managed to review 14 of them. He’s also popped up at an Ultra Culture Cinema event and his review was very niche. I don’t think anyone enjoyed it, apart from the people […]