Review Of The Year 2010: My 10 Best Cinematic Experiences 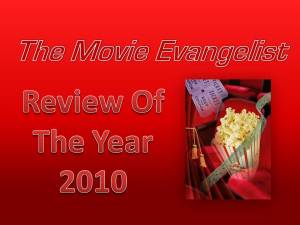 Regular readers of this blog will know that, two years ago, I set myself the task of watching 100 films in a year, simply to see if it could be done without going mad or incurring serious injury. Well, it turned out that it could, I did, seeing 107, and now non-regular readers know this too, as I’ve not stopped going on about it ever since.

Well this year, I had different aspirations. I just wanted to see as many good films as possible, plus a few indulgently bad ones and whatever my wife wanted to see. Starting to blog, though, has led me down lots of dark and dangerous paths, most of which have lovely warm cinemas at the end, so that’s all right, then. It sounds like the worst kind of modern reality TV cliché, but I have discovered this year that cinema really is as much about the experience as anything else, and sometimes you have to invest a little in that experience yourself to get the most out of it. So here is my unashamedly personal run-down of my ten best experiences in a cinema this year.

10. Discovering that there might be the odd person or two who is interested in what I think about movies

Well I haven’t been completely without readers, although the majority of people who’ve been to my blog have done so because I have the sixth most popular image of Peter Pan on Google. (Image search “peter pan” if you don’t believe me.) But to all who’ve braved this blog this year and possibly found something worth their time, I thank you. Fortunately I do write this for my own benefit to a certain extent, so readers aren’t essential, but they are nice, all the same.

9. Seeing some hard to find films in far flung locations

I’ve put the miles in this year. My nearest cinemas are all twenty miles away, in different directions, but I’ve also clocked up a few trips to London (coming up later) and some insane mileage to see some other movies I liked the look of, including 110 mile round trips to see a Date Night / Cemetery Junction double bill and also City Island, 126 miles to see MacGruber / Please Give and a titanic 134 mile round trip to catch Black Dynamite, having already seen another film somewhere else that day.

8. Seeing my favourite film of all time on the big screen

I was eleven when Back To The Future first burst onto cinema screens, and it was a time when the cinemas near where I lived were dying out, so VHS had become our only movie-viewing option at the time. I loved it, then, have fallen for it increasingly over the years, and a trip to see it on the big screen in October confirmed its place in my heart as my favourite of all time. I then wrote about 88 reasons why it was so great, which helped to put my blog into a review backlog from which it has never really recovered. Great Scott!

7. Seeing my first old classic in a packed house

I’ve also been more than a bit sniffy in the past about seeing older movies in the cinema, but came to the realisation that these should be cherished and appreciated as much, if not more so in many cases *cough* Michael Bay’s output *cough*. So while in London, meeting a friend I’d made on Twitter for the first time (another unique experience for 2010), we took in the showing of The Shop Around The Corner at the BFI, which played to a packed house, and got more laughs than anything else I saw all year.

6. Becoming completely uninhibited when showing my emotions in movies

For many years, my family have attempted to maintain that I blubbed my eyes out when watching E.T. at the cinema when younger, and I will still hear none of it. Other than a slight eye-related moistening when watching Babe in 1995, I had remained the dry eye in the house all the way up to last year, to Up in fact, when those Pixar bastards caused me to blub repeatedly like a little ginger baby (see left). It seems that the floodgates of my emotions have now been opened; Toy Story 3, Mary and Max, Winter’s Bone, Of Gods And Men, none of which made me cry, but at all of which I coincidentally seemed to have something in my eye. Sniff.

5. Getting to talk to Mark Cousins in an extended Q & A

I managed to catch Mark Cousins’ The First Movie when it was on tour in October, at the Cambridge Arts Picturehouse. The lovely people there got him to stay for a twenty minute Q & A afterwards, and then a second Q & A was organised, in a little meeting room upstairs at the back of the screens. About two dozen of us huddled in on a circle of chairs, like some kind of Cinemaholics Anonymous meeting, and grilled him for another forty-five minutes on his brilliant film, cinema in general and anything else we could think of. I never would have thought of opportunities such as this previously, but would consciously seek them out now, and would encourage you to do the same.

4. Going to an IMAX double bill

If you’ve never been to an IMAX showing, then you haven’t lived. Sadly there are only a dozen in this country, and half of those are sort of mini-IMAXes, which sort of defeats the object. But for a sound and vision experience unlike any other, then you need to get to one if you ever get the chance. I saw an opportunity earlier this year for a unique double bill, and saw Inception (for the second time) and Toy Story 3 (for the first) on the biggest screen in the country. It was an amazing experience, and the best sound (for the former) and picture (of the latter) of any films I saw this year.

3. Hosting my very first Q & A with a director

Not content with sitting in on Q & A sessions and attempting to hog all the questions, I also ended up actually hosting one, with director Richard Bracewell, who also wrote the Richard E. Grant / Tamsin Greig / Laura Fraser thriller Cuckoo that might just still be in a cinema near you. The chance to meet up and absorb that knowledge and enthusiasm was a real thrill, Richard was a delight and I was simply glad to be able to introduce him to an audience of fellow film lovers. This may not be the last you hear of me; I look forward to what 2011 has in store in that regard.

I’ve lived in the Cambridgeshire area for three years now, and in that time had not, even once, ventured into the film festival, being a little unsure what to make of it all. Late last year I was flicking through the brochure and came to realise quite how many cinematic treats and early releases I’d missed out on, so resolved not to make the same mistake again.

So this year, I booked the week off work, warmed up the debit card and booked myself in for eighteen different screenings over the course of eleven days. An unfortunate ticket printing mix-up on the first evening meant that I then had seventeen of those tickets in a little pouch, which I carried round like a giant ginger Gollum for the next week and a half, but not going to see at least a film a day became a real culture shock at the end of the period. In the end I added in one more, for a final total of nineteen, and there wasn’t one in that I regretted seeing.

I also managed to get to three more Q & A sessions, talking to a fantastically diverse range of people, but my closest encounter came on the last day. Parking problems meant that I arrived at the cinema late for the start of my first screening, a fab Norwegian horror called Dark Souls, and as I opened the first of the two doors into the cinema a man greeted me and filled me in on the very brief amount of plot I’d missed. “Oh, and by the way, I’m the director,” he said. “Nice to meet you,” I replied. You wouldn’t get that at a normal screening.

But the undoubted highlight of my year was attending the BFI / Empire Movie-Con in London in August. Three days of fabulous previews, more Q & As (including where I got to ask Edgar Wright the price of a pint of milk, to a round of applause from my fellow Movie-conners, and then, bowled over as I was by his utterly amazing movie and caught up in the moment, attempted to tell him the philosophical, love conquers all answer, to a chorus of general boos. Oh well, can’t win ’em all) and constant drama. I blogged extensively at the time about the trials and tribulations of getting a ticket, then getting there at all, but it was worth every second of the drama and the agony.

It was the purest distillation imaginable of what makes cinema great; a fantastic venue (the BFI’s NFT1, where even my back row seat had an acceptable view), great sound and vision, Kim Newman’s Bastard Hard Film Quiz, where I got the Pixar tie-breaker all correct, but nowhere near enough other answers for that to be of any use, and even sat just behind a couple who got engaged on stage. I also made a great collection of new friends, all of whom were bonded through the adversity of just being there in the first place.

I’m already looking forward to Movie-Con IV, although I do plan to get my ticket in person this year to attempt to avoid that drama; I hope all of the drama will be on the screen and not in my life next year. Here’s to whatever the experience of cinema has to offer me next year.