The Friday Encourager: Ten reasons to see Cuckoo this week 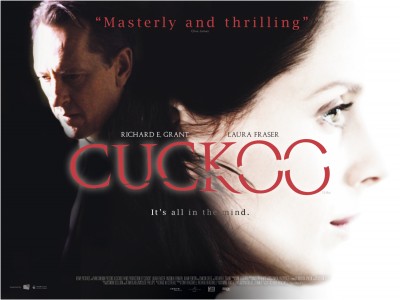 It’s Friday again and it’s time again for my recommendation for what you should watch this week. Truth be told, it’s actually Sunday when I’m posting this. Sadly I have been so busy this month that I couldn’t manage to write a post dedicated to Fridays on a Friday. I toyed for a while with the alliterative Sunday Supporter, but I eventually decided “my blog, my rules”, so I’m posting a Friday post on Sunday. I’m just that daring. (I also dunk digestives in my tea for over ten seconds at a time and I never wear a hat out in winter. Total rebel, me.)

At times like this, cinema is more of an escape than ever. There’s nothing better than huddling down in a warm cinema with the crowded masses to get away from those other crowded masses frantically flinging their last few pennies down the gaping throat of consumerism, and all in the name of Christmas. This week is a typical week in release schedules, with a big Hollywood blockbuster or two (Tron: Legacy, Burlesque) and a talked about indie (Catfish) all getting screens. But this week, I’m going to suggest something a little different for you, and here’s why you’d be mad not to give Cuckoo a chance.

1. I couldn’t wait until next Friday to tell you. Sadly we live in an age where opening weekends are everything, and where to get a film to stay in cinemas for more than a week before the latest Harry Potter swallows up all the screens is a challenge in itself. So the longer I wait, the less chance there is that you’ll actually be able to see it.

2. The director is a bitter man. At least that’s what we had to drink before the Q & A I hosted the other evening. I got the chance to talk to writer / director Richard Bracewell for over an hour, and what comes over instantly is his real passion for his work and thorough knowledge. That comes through on the screen, but it’s not forced down your throat in that overly referential way that so many movies fall into the trap of these days.

3. “We want the finest wines available to humanity! And we want them here, and we want them now!” Hopefully words familiar to any fan of Withnail and I, and there are many of us around. Richard E. Grant is one of those actors who instantly elevates the quality of anything he touches, and he gets to play a little against type here.

4. Tamsin Greig is a national treasure. REG is not the only big name in the cast. From Black Books through Green Wing to this year’s Tamara Drewe, Tamsin Greig is also fantastic and is one of the finer actresses to grace both small and big screen in both comedy and drama working at present.

5. Laura Fraser should be a national treasure. That’s not to say that all of the acting talent is wrapped up in the two most famous names. Heading the cast is Laura Fraser, who’s most recently been seen on our screens in BBC3’s Lip Service and who perfectly embodies the creeping paranoia at the core of the film. But there’s not a false note across the whole cast.

6. It’s a local film, but it’s not just for local people. Interiors filmed in a warehouse in Great Yarmouth? You wouldn’t know. The movie has a fantastically creepy edge, and this is helped not only by the well staged interiors but by the cinematography and the locations, which help to build the paranoia.

7. It shows how important sound is in the cinema. I’ve spent most of the past year attempting to explain to people why movies should be seen in the cinema, and this perfectly embodies that concept. For a film that relies on its use of sound to affect the characters actions and motivations, unless you have a top end home cinema you will do yourself a disservice. Andrew Hewitt’s score is also moodily effective.

8. It’s got an appalling score on Rotten Tomatoes. (Wait, what?) Which goes to show how utterly misleading these things can be sometimes. Cuckoo has gotten strong reviews from at least three major newspapers, two of which haven’t yet appeared on the site. It’s also struggled to make some weekly publications as the clutch of new releases this week means that it’s missed out in a few. It does go to show that you should base your viewing choices as least as much on your personal preferences as on the opinions of others.

9. It twists and turns like a twisty, turny thing. Like movies with twist endings? I count The Shawshank Redemption, The Empire Strikes Back and The Usual Suspects among my favourites, and theirs and others like them have an enduring popularity that shows we all love a twist. Cuckoo might not be in their league (sorry, Richard) but it does have a doozy of an ending that will get you to reconsider what’s gone before.

10. It’s keeping the British end up. I came to the realisation while talking to Richard that I’ve seen more French films this year than British ones, and that’s a shame. I’m not suggesting you should blindly go to watch any British movie (hint: check to see if Danny Dyer is in the cast first) but this one will be worth 90 minutes of your time if you’re willing to give it a go, and by doing so, hopefully you’ll help more British product find its way into our cinemas.

This entry was posted in Evangelism and tagged Cuckoo, Richard Bracewell.