Where are all the intellectual pirates? 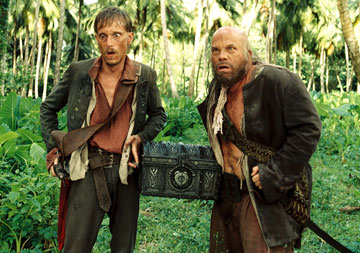 I’m a rubbish timekeeper. If they were to draw up a list of people likely to be late for their own funeral, I’d not be on it because I’d be late for the meeting where they pulled it together. It’s not that I’m disorganised; rather that I’m overly precise and can’t stand being early for things, which means if even the slightest thing goes wrong, then you’ll have to start without me.

Cinema in its current form is ideal for me, because the time stated is never the time the film actually starts. At least in most cases. Normally, anything between 15 and 25 minutes of adverts of increasingly diminishing quality and trailers that you’ve seen several times before if you have iTunes and the internet, before things actually get going. True to form, I normally arrive in my seat 14 to 24 minutes after the scheduled start time, but it’s rare that I actually miss the Orange advert which plays at most of the screenings I attend. (God, how I’d love to miss the Orange advert, not feel that it’s been burned onto my brain through over-repetition.)

Despite this, I did manage to miss the beginning of one movie recently, The Brothers Bloom. There’s nothing worse than walking in and realising that trailers and adverts are a distant memory, the BBFC logo has come and gone and possibly https://movieevangelist.wordpress.com/wp-admin/post.php?post=613&action=editcrucial establishing chunks of plot are unspooling before you’ve even located the popcorn holder in your seat. But I also car share with my wife, and so in the past few weeks I’ve missed the end of two more to go and pick her up from what she’s doing. Greenberg and Heartbreaker didn’t get to the end before I was heading down the aisle – leaving me with a bit of a dilemma.

The whole ethos of this blog is to encourage people to see movies at the cinema, but it’s nice to actually see the whole movie when you do. Now here’s where the internet shows its true colours – what options are there to catch the beginning or end of a movie that’s still in cinemas?

And herein lies problem one as well. You want to see Twilight or Toy Story? No problem, you don’t even need to scour the internet, there’s torrent sites practically knocking your door down. I honestly can’t condone that kind of behaviour – a friend of a friend’s kids have already seen a dodgy knock off of Toy Story 3 at home, and when I found out a little bit of me was so sad I think it died.

But this only seems to work if you’re looking for something that appeals to the mass market. Down at the more refined end of the spectrum, there’s not much chance of finding what you’re looking for.  Sadly, no-one was offering me a rip-off copy of Heartbreaker at the local car boot sale, and apparently you can get a torrent of Greenberg if you speak Russian, but not English. (So apparently I’m niche, but not niche enough.)

What this did throw up as an option, though, was legitimate web video – I solved my The Brothers Bloom issue thanks to the wonders of YouTube.

Rather than watch the bit of the movie I’ve not seen, there’s the option of just reading about the bit I missed. Sites such as The Movie Spoiler and Ruined Endings offer a valuable service to those who simply can’t be arsed with watching a movie to see if it’s any good. But again, where this has worked in the past for movies I’ve found so brain-cell-meltingly-awful that I had to leave of my own accord (stand up, The Invention of Lying and The Love Guru), so that I could confirm I didn’t miss anything decent, some of what I go and see is very hit and miss.

Greenberg has just appeared on the site, but no sign of Heartbreaker yet, or indeed the most recent film I saw (and one where I would have loved to check my understanding of the time-choppy plot), White Material. So maybe there’s a need for something a bit more direct.

For this option, the simple route is to go to somewhere with message boards – in my case, the IMDb sufficed for Heartbreaker. The internet is full of people with (a) strong opinions, (b) the inability to keep their mouth shut, and (c) no particular threshold for ruining it for other people. You’d better know about Luke’s dad, what was up with that feminine-looking dude, what’s in the box and how many dead people he’s seen if you’re going to spend any serious time on the internet. Even with that in mind, you’d better be prepared for a long, hard session of random abuse between complete strangers if you’re going to wade through enough of this to find the particular info you’re looking for.

Well, at least it validates my ethos. I have now seen Greenberg one and two thirds times, and all but the last five minutes of Heartbreaker twice. Until we get some more intellectual movie pirates, guess I’ll have to stick with the inside of a cinema. And that’s fine by me.